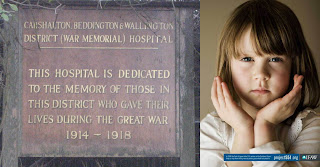 This week's Sutton Guardian showed an interesting contrast in the approach of Tom Brake MP and Ken Andrew, his Conservative challenger.

Ken Andrew has been collecting a petition against the proposed sale of the Carshalton War Memorial Hospital to a housing developer. He has gone around speaking to residents and surveying opinion. Ken told the Guardian "There was a massive response to the petition. The hospital was built with money raised by local residents after the first World War, as a memorial to those who bravely gave their lives for their country and local residents feel as passionate about keeping the Hospital as their predecessors did in financing it.”

This issue will have a significant impact on people living around Carshalton Park and in Salisbury Road as well as the wider implications for local residents with the loss of land in public ownership and a war memorial. I've helped a concerned resident build up a membership of over 100 supporters on a Facebook group on this matter.

Meanwhile Tom Brake has been photographed making a "Whale tail" sign as a show of support for the International Fund for Animal Welfare campaign. Now, let me explain how these campaigns tend to work. A parliamentary lobbyist will book a committee room in Parliament, sponsored by an MP and put a few bottles of wine in it. An email round robin goes around and people turn up for a few minutes of networking and wine, whilst waiting for the early evening votes in the Chamber. A cameraman will snap away at MPs standing in front of a banner. The photo then gets emailed to the MP with a sample press release saying "

MPs do retain some influence, even in these cynical times, so there is nothing inherently wrong with lending their support to raise the profile of a campaign. There is nothing wrong in seeking to protect the welfare of animals. However, I'll take the person getting their hands dirty, out and about responding to local residents every time.
Posted by Unknown at Monday, February 16, 2009

...and I'll take the man who puts local issues first every time.