Beau B'Dor getting to the nub of the problem. 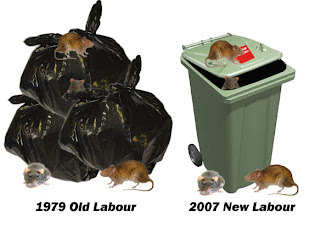 In a recent press release, LibDem Council Leader, Sean Brennan rightly said that the Government should not force fortnightly waste collection on local authorities through the introduction of Joint Waste Authorities. What he failed to go on to say was that Sutton will not reintroduce fortnightly collections by its own volition.

During a campaign between 1999-2001, led by David Pickles, 22,000 residents signed their name to a petition calling for the reintroduction of a weekly collection forcing the council into a U-turn.

I'm sure that Cllr Brennan will want to correct this omission.

"I have expressed a degree of regret that can be equated with an apology."
Des Browne mumbling some words of regret over the naval captives' stories fiasco. 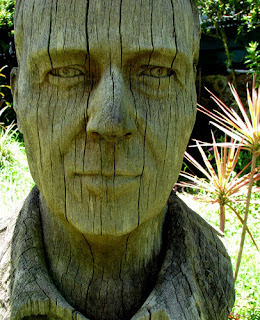 Let's hope that the totem poles aren't simply a farewell present to MPs Brake & Burstow and carved in their vision. Anyway, the Evening Standard read this blog and did an excellent job in finding out a little more about the project. Since the £600,000 bus stop was getting a little old hat, it's nice to have another permanent fixture reminding us of the spending habits of this Council.

A Council is to spend an estimated £20,000 erecting two giant totem poles in public parks. Sutton council has been granted planning permission to put up the 18ft carved oak sculptures, which it says are intended to make “a notable visual impact”. It comes as the Liberal Democrat-controlled council has disbanded its parks police service, leading to accusations that the totem poles are a waste of money and will encourage vandalism.

Councillor Paul Scully, leader of council’s Conservative Opposition group, said: “It’s an absolute waste of money These things are going to cost tens of thousands of pounds which could be put to a much better use.”

“We applaud the project to improve our open spaces, but why on earth do we need to top it off with these pieces of abstract art? It’s laying down a challenge to the anti-social element of society like a red rag to a bull.” The totem poles are part of a £490,000-scheme to improve open spaces across Sutton, including footpaths and play facilities such as a skateboarding park for teenagers.

The poles will be made by Sussex sculptor Walter Bailey, who has sold 11 similar pieces to Surrey County Council for £75,000. One will be located on the highest part of St Holier Open Space, next to a path and visible from St Helier Hospital. The other will be on Middleton Open Space so that it can be seen by passing drivers and pedestrians. It is intended to “balance” with neighbouring mature oak trees. Until this month, eight police officers in 4x4s patrolled parks across Sutton to deter vandals and prevent anti-social behaviour.
Posted by Unknown at Friday, April 20, 2007 No comments: 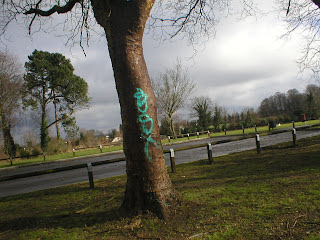 I've outdone myself on my alliterative title. Anyway, the Sutton Guardian published letters from me and Eric in response to a letter from the lead councillor Graham Tope which was somewhat short on explanations as to why we won't have our parks policed properly over the summer despite the new scheme having been discussed since last year.

Extract from my letter:-
Additional funding for our Safer Neighbourhood Teams is always welcome in the long term, of course, but unless this extra money can sprout legs, drive cars and nick antisocial yobs within days - what additional reassurance will this give to users of our parks and open spaces over the summer? Very little, I imagine.
The charge of scaremongering that the Liberal Democrats hurl at anyone who might question their decisions has now lost any credibility. When will they just swallow their pride and say, "we were wrong, we are sorry"?

Extract from Eric's letter:-
The gap between the Parks Police finishing on March 31 and the Met Police being trained to cover the park duties could be up to six months, which would take us to the end of the summer.
It was a senior police officer that gave this timetable, not a scaremongering politician.
We should not be increasing the workload on the Safer Neighbourhood Teams, who at this time of the year are fully committed with their own duties.
Posted by Unknown at Friday, April 20, 2007 No comments:

A Totem to Brussels

Just returned from a Development Control Committee meeting. Two items of note. Firstly we rejected a back garden infill development that followed the "John West" school of design, ie squeezed in like sardines. It was proposed that two houses shared a single parking space! Hmm.

The second item was for two totem poles to be erected either side of the St Helier Open Space. Yes, totem poles. I applaud the overall initiative of Groundwork Merton who have worked with residents in St Helier to improve the open spaces in the area. The new skateboard park will be well received. However, I still ask myself, when funding comes from the EU, why do the ensuing projects have to be accompanied by odd pieces of abstract art. Strange sculptures litter the roadsides of France, Belgium and Holland. Now we are to have two poles apropos of nothing. Several councillors tonight asked the rather relevant question as to what thought had been given to the risk of fire. The answer was given that the sculptures were designed with vandalism in mind. I hope that the unfortunate reply isn't prophetic. They might just present a new challenge to the antisocial element. The design in the photo isn't from St Helier, although CCTV in the eyes and a loud speaker in the mouth might just run alongside Government thinking to ward off those seeking a fresh pyromaniacal challenge.

Others will judge whether I am a Philistine. I'll just keep asking how much the poles cost to erect and maintain.
Posted by Unknown at Wednesday, April 11, 2007 1 comment: 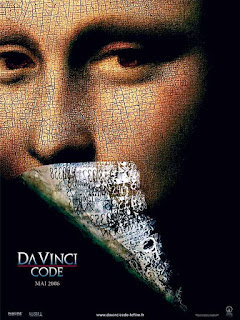 Councillors seem to be hemmed into a Code as fantastical and as faintly ridiculous as Dan Brown's Da Vinci Code with more immediate ramifications even if they don't resonate across quite such a wide area.

The Code of Conduct that each councillor has to sign was introduced for some valid reasons, ensuring that councillors put their own interests aside whilst discharging their duties. As ever, the actual wording of the code ties up elected officials in more red tape than Gordon Brown's cassette collection. There have been examples of councillors being elected on the back of a single issue and then gagged citing the fact that they have a "predetermined position".

Many residents will be aware of the impending decision of the location for the rebuilding of Stanley Park High School. I have explained on every occasion that I am a Governor at the School and so have a favoured site where I would like to see the school rebuilt.

Councillors and residents had the opportunity at last week's Carshalton & Clockhouse Area Committee to contribute to the debate minuting their thoughts for the benefit of the Strategy Committee that would make the decision as to the location...That is, all councillors except me! I contribute to the project team for the rebuilding of the school so there is no doubt that I have a predetermined position. The Head of Legal Services gave me the only advice that she could; I not only couldn't contribute to the debate but had to leave the room while the matter was being discussed.

Since most of the time that was allocated to questions from the public was taken up by questions about the school, I sat in an empty room for the best part of an hour twiddling my thumbs whilst the most controversial subject to affect Carshalton in the last five years was discussed. I certainly have no argument about the advice given. Indeed, we both rolled our eyes when we realised that the situation would be different after the 3rd of May (after this decision will have been made) when the Code is changed.

As usual, my argument is with the Labour Government whose sticky fingers intrude on every aspect of our lives, in this case neutering the already limited effect that locally elected politicians can have in their own areas. It is local politicians that know best not some pontificating tubby from Westminster who is looking for his next promotion. I have long been a fan of localism as embodied by the group of MPs and politicians that developed the Direct Democracy agenda.
Posted by Unknown at Sunday, April 08, 2007 No comments:

Summertime and the trouble is easy 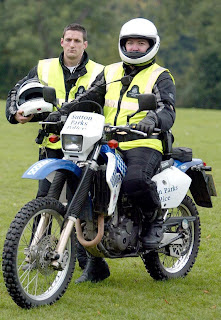 The Sutton Guardian has covered a vital issue that we raised
last year. The LibDem Council has in their wisdom scrapped the Parks' Police in order to make sufficient cuts to limit the increase in Council Tax to only the second highest in London!
In doing so, they neglected the fact that the replacement units supplied by the Met wouldn't be up and running for six months whilst training is completed. This leaves the parks unpoliced throughout the summer when the majority of the trouble occurs.
Eric and Barry Russell have tackled the Lead Councillor Graham Tope about this, predicting problems with the introduction of a new scheme only to be told that there was nothing to worry about. Their fears have proved to be correct. I'm sure that there isn't a single resident in the Borough that would mind saving money if the parks are policed effectively. It was not clear exactly how the savings would stack up. I guess that scrapping the service entirely for half the financial year is clear enough.
Leave a comment here to share your thoughts but also let others know. Why not respond to the article in the Guardian by emailing them?
Posted by Unknown at Friday, April 06, 2007 No comments: 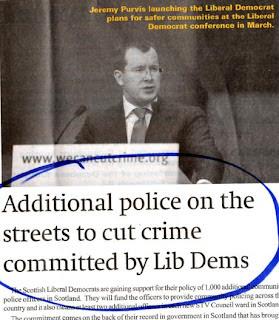 We've being getting it wrong all of these years. It's not more bobbies on the beat that is required, just fewer LibDems on the streets. Not long to go before you have an opportunity to put that right! 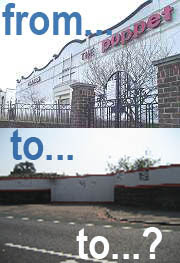 A BMW car dealership and 27 light industrial units have been given the green light after a unanimous decision by Sutton Council’s Development Control Committee.

Two local residents spoke very well sharing their reservations over the detail of the application whilst welcoming the regeneration of the site which has been empty for two years. They addressed issues such as construction materials, noise, security and sewage

Alongside my colleague Tony Shields I pushed Officers to tackle these and other issues, receiving assurances that the site would not be able to be accessed via Willoughby Avenue without a further planning application being heard and approved by the Council.

Parliamentary Candidate for the Conservatives, Ken Andrew said afterwards, “I’m pleased that the Tory councillors were able to ensure that the Planning Officers dealt directly to reassure the residents. Of course the proof of the pudding is in the eating but residents will be happier knowing that the site will not lay derelict for much longer.”

The Greater London Authority has had fourteen days to review the decision. The Mayor can direct a refusal but since the GLA have contributed a lot to the report by the planning officers including insisting on a contribution of £90,000 from the developers to improve the road and bus stop approaching the site, he is unlikely to take further steps.
Posted by Unknown at Wednesday, April 04, 2007 No comments: