You have probably seen that the Conservatives have followed Prince in being represented by a squiggle. There are strict rules imposed centrally on the use of the new logo. Never sticklers for the rules, MEPs Chris Heaton-Harris and Roger Helmer have given us this Christmas wish. May I add mine and wish you a prosperous New Year when the squiggly tree might truly blossom!

(You need the sound turned on)
Posted by Unknown at Wednesday, December 20, 2006 No comments:

Where Your Taxes Go, Part 1 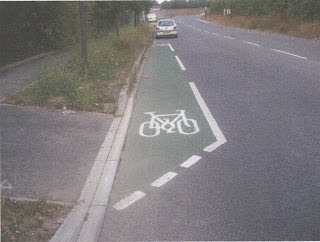 As the annual horse-trading starts, when the LibDems give us their list of proposed cuts, ready to come in claiming to save the day in March when the council tax increase in announced, here is the first in an occasional series where you can judge whether your taxes were used well or not.

An eagle-eyed constituent took a photo of this 55ft cycle lane. Not sure if Ken Livingstone had this in mind to encourage more cycling. The lane also seems to end just in time to bring cyclists back amongst the traffic on a blind bend.
Posted by Unknown at Sunday, December 17, 2006 No comments: 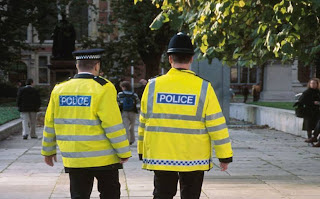 At the last full Council Meeting, I proposed the main Motion, seconded by Eric, looking to use all tools at the disposal of the Council to fight crime in the Borough.

Sutton has the lowest number of police officers of all London Boroughs. In the past six months, my 15 year old neighbour has been kicked unconscious in broad daylight, a 14 year old family friend was punched and mugged on a bus, a thrown firework narrowly missed my 8 year old daughter and my son had a stick pushed into the spokes on his bike sending him over the handlebars onto the busy Croydon Road. I am not interested in being safer than Hackney or Newham. I want the best policing for Sutton, not just to rely on demographics to keep us near the top of a league table.

My colleagues and I argued for the use of dispersal orders in certain troublespots in the Borough. Guy Road in Beddington and Fairlands Park in Cheam suffer from antisocial behaviour. Allowing police officers the ability to move crowds of youths on can help. Although it moves the problem on, when surrounding areas use such orders, the problem grinds to a halt in Sutton. It may be a short term fix but it disrupts behaviour in the meantime and is only a single weapon in the police armoury not the be all and end all.

We negotiated an amendment which included the line "This Council supports the use of dispersal orders if and when requested by the police." This is a clear reversal of policy by the LibDems so a very good result for residents around these trouble areas. Now it is up to you to ask the police for their use if you see such problems around your area.
Posted by Unknown at Sunday, December 17, 2006 No comments:

The second plan rejected by councillors to demolish four houses next to All Saints School in Rotherfield Road and replace them with nineteen flats for sheltered accommodation was allowed on appeal to the Planning Inspectorate.

I was a member of the committee that rejected this application. Four attractive houses are going to be torn down to be replaced by a soulless development in an area that suffers from parking and traffic problems with the school and High Street putting pressure on the surrounding roads. We have pushed to get Rotherfield Road included in the conservation area but to no avail and so the well organised residents' committee (CRAG) who have battled to protect their road have to suffer the thin end of the wedge as the first development of this kind comes to this part of the village. The residents are looking to fight on and I wish them the best. With a lack of support coming from planning policy in this council, from the Mayor and certainly from national government, it is up to local residents to stand up to these pressures and ensure that they can continue to live in the area that they want to live in rather than being dictated to from a distance.
Posted by Unknown at Sunday, December 17, 2006 No comments:

The phrase "stealth tax" has become well-worn over the last few years. I really like the idea of a flat tax in principle where everyone is taxed just once on their money (rather than on income, then stamp duty and on savings when it is invested and then VAT when it is spent and finally inheritance tax.) However there are significant problems in trying to introduce such a system to a mature economy like the UK. In lieu of this, a flatter tax system will do. People have no idea how much tax they pay. Gordon Brown in particular has complicated matters beyond belief. Lord Saatchi has proposed a Bank Holiday on "Tax Freedom Day". This is a symbolic day calculated by the Adam Smith Institute to show what proportion of the year you are working for the Government to pay your taxes.

So in 2006 all of our income from New Year's Day until 3rd June went to cover our tax bill. The rest is ours to decide what we want to do with our own money. In 1997 it fell a week and a half earlier on the 25th May. The definitive tax guide Tolley's Yellow Tax Handbook has increased from 4555 pages in the 1996-7 edition to an accountant's shelf-breaking 9050 pages in the 2005-6 edition.

Anyway the video above is a Republican advert. Typically American but the point is clear.

The Future of the Carshalton War Memorial Hospital 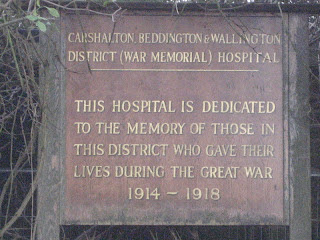 The hospital opposite Carshalton Park has been closed for sometime now. I have been contacted by several constituents asking about what is planned for the site. We have all heard about the financial problems of the Primary Care Trust so residents are rightly worried about the prospect of the land being sold off for housing.

I have found it impossible in eight months to contact anyone in the PCT that can tell me anything so I was pleased when I saw that the Wallington Forum was being updated on the situation. I have to get what I can take as I couldn't fathom why it wasn't to the Carshalton Forum that they presented their report since the three ward councillors sit on this body and not the Wallington Forum.

I left the meeting with some optimism. The plan is to use the site as a "Post Acute Intermediate Care Unit". Essentially this is for people that still need a hospital bed but are going through physiotherapy or such like. Carshalton would provide the beds for recuperation but in very different surroundings to a typical hospital. This fits in with the "Better Healthcare, Closer To Home" government initiative. The PCT project manager is due to produce the business plan in order to get the funding within six months.

The building on the site will not be kept. They left the meeting fully versed with the fact that it was a Memorial Site and so should be treated sympathetically. There is a possibility that the facade of the building would be kept. To my mind, I would rather see it used as a small cottage hospital of any sort even with changes to the building, than an overdeveloped housing estate. Now I have made a contact at the PCT, I am keen to keep a close eye on this site.
Posted by Unknown at Sunday, December 17, 2006 1 comment: 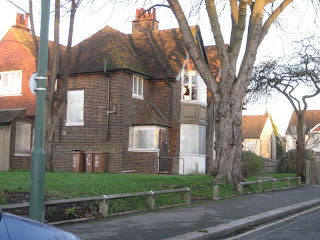 We had an update on what was happening to the buildings on Ruskin Road between Rotherfield Road and Acre Lane and the answer was ... not a lot.

The large house on the corner is locked up whereas the small bungalows are still being used as temporary accommodation. They are due to be redeveloped but their future is linked to the Durand Close regeneration project in the Wrythe. This is a massive project involving the controversial valuations of residents' flats in a Compulsory Purchase Order exercise and the relocation of several families, so little will be happening in the coming months. When it does, rest assured you'll hear it here first.
Posted by Unknown at Sunday, December 17, 2006 No comments: 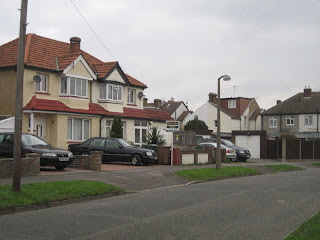 I have been contacted by constituents about the application to convert a house in Brookfield Avenue into a House of Multiple Occupancy (HMO) with staff quarters (Ref. C2006/56621).

There is no information in the application as to who might be living there. Staff accommodation suggests considerably more than simple bedsits.

I have been in contact with the planning department to clarify the position. The planning officer has requested further information from the applicant, specifically to find out more about who is to be living in the property. The applicant has 21 days to respond. If he does, the planning department will give neighbours another opportunity for consultation and to raise objections on the fuller facts. If he does not respond, the planning officer can judge the application on the information to hand. Commonsense would suggest that he would find it difficult to approve of the application if he does not have all of the information.

My usual "without prejudice" clause for talking about live planning applications applies (See Coleridge Avenue below).
Posted by Unknown at Sunday, December 17, 2006 No comments: 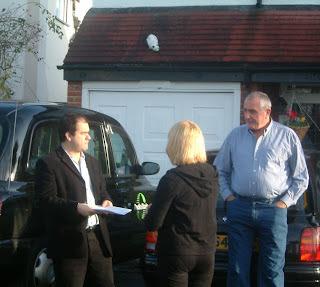 Developers have returned to a site on the corner of Coleridge Avenue and Shirley Road in the Poets' Estate where a similar plan was rejected last year.

The planning application proposes the demolition of the corner house and the building of seven houses in its garden.

This application is as controversial as the first with several residents objecting on similar grounds to before, namely overdevelopment of the site which is prone to flooding from the culverts running alongside the garden and the danger posed from traffic going in and out of the narrow corner access. Despite our best efforts the Poets' Estate was not recommended to be designated as an Area of Special Local Character (ASLC), which would provide an extra hurdle for potential developers but we were promised that the Local Development Framework would provide a sensitive approach to this individual area. I suspect that this will be the first test of this promise.

As a member of the committee that may decide on this application, I will decide on the night if and how they have overcome the reasons for rejecting the original application. Comments on the application (ref. no. C2006/56847) should be sent to London Borough of Sutton, Environmental Services, 24 Denmark Road, Carshalton, Surrey, SM5 2JG.
Posted by Unknown at Sunday, December 17, 2006 No comments: