Protecting the character of the Poets' Estate 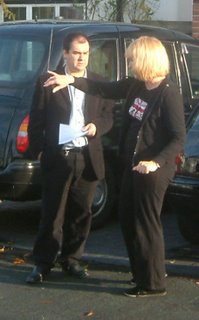 Despite only having had one day's notice of the event, I attend the Strategic Planning Advisory Group meeting as they considered whether to make the Poet's Estate an Area of Special Local Character (ASLC). Planning officers were not keen as they claimed that there was no prevalent architectural style.

Pointing out the pressure that the area is under, in the light of the Coleridge Avenue planning application, I was able to repeat the prayer to the petition signed by 298 local residents last year which stated that Sutton Council themselves had claimed the area as "part of the borough's heritage heartland" in the Sutton Scene magazine. There are three main considerations, the townscape, architecture and landscape. I believe that the Estate clearly demonstrates that it meets all three.

The result was a partial success. The planning officers are not keen to add any more ASLCs as this weakens the protection for the existing ones. A new policy to be included in the Local Development Framework will act as an overarching policy to protect particular suburban character in areas such as the Poets'. The decision has been deferred for six months whilst this new policy is implemented. If the committee do not feel that this is robust enough, they can reconsider the merits of the case and we shall start over again. At least I have six months' notice this time.
Posted by Unknown at Wednesday, September 27, 2006 No comments: 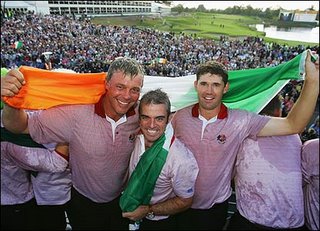 Although there was a little council business to do over the weekend, the majority of Saturday and Sunday were blocked out to watch the Ryder Cup on TV. What a fantastic competition played in such a fantastic spirit. The way the crowd and players from both sides supported Darren Clarke after the recent loss of his wife, his perfect response in the quality of his play and the sportsmanship of Padriag Harrington in allowing JJ Henry to tie their final match after the overall result had been decided was uplifting.

However the political anorak in me and subsequent press coverage got me thinking. Lord Patten has written about how the European team spirit shows that closer integration in the EU can be a good thing. In response, I'll just point out two things. The three Irish players (from both sides of the border) showed enormous national pride as did the Irish crowd and rightly so. Secondly, the campaign to have only one European Parliament building based in Brussels has reached one million petitioners, demanding that the monthly 500 mile round trip to Strasbourg just to pacify the French is ended. Can you imagine the Ryder Cup being held in Belgium with the Saturday afternoon foursomes being held in France, only for the players, entourage and supporters to return to Belgium for the Sunday singles? (For the non-golfing readers, I'm already stretching the point with the metaphor but just trust me it would be tedious.)
Posted by Unknown at Tuesday, September 26, 2006 No comments:

Development is like red rag to a bull for residents 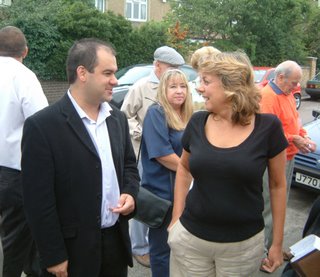 I have just returned from a press photoshoot in Rotherfield Road with the Rotherfield Road Action Group (RAG). Since the third application for sheltered flats in the road has been rejected, the focus of the Post has turned to the wider issue of development in the village, something that I concentrated on in my election campaign.

In May, I drew together residents in pockets of the ward and brought their attention to each development. It is vital to see the wider picture, that it is not just the odd application taken in isolation, but a systematic change that will alter the character of Carshalton and indeed the Borough forever.

There are two things that we can do. Locally we need the very strongest protection. We have an opportunity to acheive this in a document called the Local Development Framework which is being compiled now. This replaces the UDP and will dictate planning policy in the Borough for the next three years. It is important that Rotherfield Road is brought into the conservation area and that places like the Poets' Estate are given special status.

Secondly we can rip up central government's housing targets for the South-East. It is madness to increase London to the size of Mexico City whilst housing is being torn down in Manchester and Liverpool. We do not have the infrastructure to cope.

I'll leave you with one fact to consider. The South-East of England has less rainfall per head of population than the Sudan. Go figure.
Posted by Unknown at Saturday, September 16, 2006 No comments: 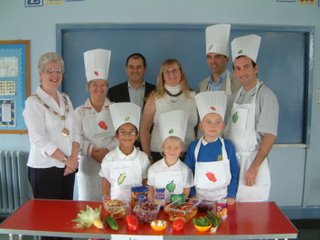 In a change to my normal lunch routine in the office canteen, I joined pupils from Muschamp Primary for a meal having watched three of them and three adults preparing salads, Ready Steady Cook style in their assembly with headteacher, Helen Underwood playing the role of Ainsley Harriott.

We were all there to launch National School Meals Week. This is a subject that has attracted a large amount of media coverage, mainly thanks to Jamie Oliver. The children seemed to respond well to the display and the addition of a salad bar to their lunchtime options.

Muschamp is close to Durand Close and the St Helier Estate and, is therefore a school that needs to take particular care over the diet and nutrition of their pupils. We discussed the fact that for many children, school lunch may be their main meal and so the choices of the Borough as central catering supplier were vital. I was really pleased to see that Muschamp had its own kitchen, enabling a wider range of options to be made available to the children. Not all schools have the room to do this. Many of the Jamie Oliver initiatives had already been introduced, but the extra priority brought to this matter by the Naked Chef's efforts bring extra funding and resources which are always welcomed.

There were no major incidents. The food stayed in the correct receptacles despite vigorous mixing by one young contestant. Tom Brake MP fought back the urge to give a sabre dance as his chef's hat came undone to make him more Cossack than Cook and I even got a sticker for eating all of my vegetables. I'm looking forward to a return visit to a school with a special atmosphere.
Posted by Unknown at Tuesday, September 12, 2006 1 comment:

Whilst we are talking about fairs... 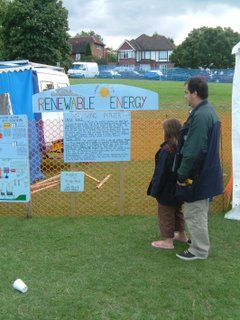 I forgot to post a quick mention of the Environmental Fair held in Carshalton Park last week. Contrast the coat in this photo with the short sleeve t-shirt in the last article. Well what do you expect? The children were still off school then, hence the rain. Back to School, back to sun. Hey ho!

Several bands in the Hog Pit entertained plenty of punters. I'm afraid I only dashed around the fair in between showers. I don't consider myself a fair weather environmentalist, only a fair weather fair-goer. (yes, I did pick up the cup in the photo and throw it away.)
Posted by Unknown at Saturday, September 09, 2006 No comments: 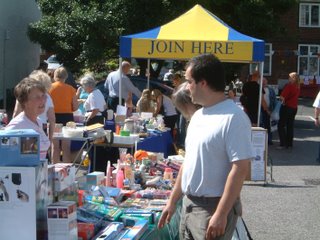 Eric & I spent the morning in the crush of people beating a path to our door for our Councillors' Surgery. OK, maybe a slight exaggeration as no-one actually turned up. Either we have 7500 happy campers or we're not advertising it widely enough. I'll try harder.

After this I wandered home via the Carshalton Charter Fair in the Square. This is an event promoted by the Carshalton Society. The first fair dates back to 1259 in "Kersaulton" as it was then known. The Society has resurrected the idea and held successful events since 1983.

Stalls selling jam, bric-a-brac and books raised money for a varierty of organisations, music and facepainting entertained young and old. Some stallholders expressed the concern that the event was not as well attended as previous events, commenting that more advertising along the High Street may have helped. It certainly was perfect weather for such an event. I will endeavour to do what I can next year to give the event a little more publicity, so I hope that you will join me in putting this weekend in your diary for next year.
Posted by Unknown at Saturday, September 09, 2006 No comments: 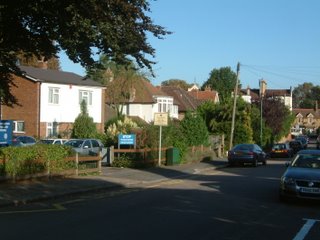 Just got back from a long planning meeting. Several residents turned up to object to this application. Eric spoke well about the level of local discontent. As a committee member I treat each application very seriously retaining an open mind as is expected of me. I voted against the application for the same reason that I did the last. It is too big, does nothing for the streetscape and will affect an already busy road. I felt that the developers had barely moved from their last rejected application. The second application is currently on appeal.

Two other planning matters. I joined the other councillors in rejecting the proposed flats on the Texaco site, mainly because of the oddity of retaining half a house, perfectly bisected with a false chimney added looking down West Street. This doesn't sit well in a conservation area. Not a bad application but more work needed.

Finally I have just read the Guardian where an article says that another application is coming for the Wentworth Hall mosque on Woodstock Road. Watch out for developments.
Posted by Unknown at Thursday, September 07, 2006 No comments: