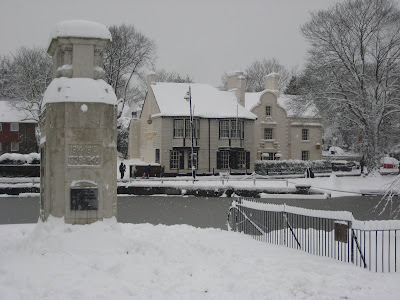 We're being warned that there is a 60 per cent likelihood of snowfall in London overnight being as severe as it was on Sunday night/Monday morning. There is also the prospect of very bad weather sustaining into the weekend.

The areas that are most likely to be affected are north and north-west London so we may escape the worst but do keep an eye out on the Sutton website and school websites if the snow comes again.

There is a co-ordinated action to ensure that all London Boroughs have enough grit to cover the main roads. That is co-ordinated by everyone except Whitehall. According to the Daily Express, Councils have been forced to relinquish their supplies to the Highways Agency. Hounslow reports that they have been ordered to hand over 300 tonnes of grit. I notice that one wag left a comment after the article to point out that the country had run out of true grit many years ago.
Posted by Unknown at Thursday, February 05, 2009

Haven't seen a grain of grit, salt or plough around these parts. The only amelioration for our freeze is a neighbours Alsatian dog which seems to have a bladder problem and can clear substantial square footage if properly encouraged!