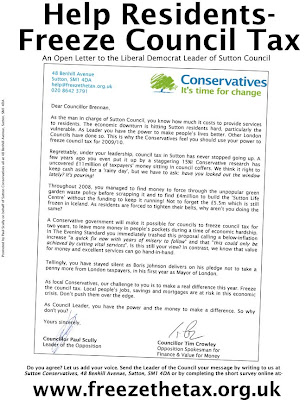 Conservative Finance Spokesman, Cllr Tim Crowley and I wrote an open letter to the LibDem leader of Sutton Council which was included in today's Sutton Guardian. We have asked him to use his power to do more for residents in this economic climate and freeze Council Tax this year.

You can see more and comment on the budget via the website www.freezethetax.org.uk. The response given at yesterday's Executive meeting from the LibDem spokesman, is that the Council's £11m that is squirreled away is better used to prop up their ailing capital programme. This will be the same councillor who is overseeing the building of the Sutton Life Centre, a place to teach young people "how to tackle life issues". The Council is putting in £4m whilst not being able to provide details of exactly how the building is going to generate the income to keep it open.

Text of the letter:-

As the man in charge of Sutton Council, you know how much it costs to provide services
to residents. The economic downturn is hitting Sutton residents hard, particularly the
vulnerable. As Leader you have the power to make people’s lives better. Other London
Councils have done so. This is why the Conservatives feel you should use your power to
freeze council tax for 2009/10.

Regrettably, under your leadership, council tax in Sutton has never stopped going up. A
few years ago you even put it up by a staggering 15%! Conservative research has
uncovered £11million of taxpayers' money sitting in council coffers. We think it right to
keep cash aside for a 'rainy day', but we have to ask: have you looked out the window
lately? It's pouring!

Throughout 2008, you managed to find money to force through the unpopular green
garden waste policy before scrapping it and to find £4million to build the ‘Sutton Life
Centre’ without the funding to keep it running! Not to forget the £5.5m which is still
frozen in Iceland. As residents are forced to tighten their belts, why aren’t you doing the
same?

A Conservative government will make it possible for councils to freeze council tax for
two years, to leave more money in people’s pockets during a time of economic hardship.
In The Evening Standard you immediately trashed this proposal calling a below-inflation
increase "a quick fix now with years of misery to follow" and that "this could only be
achieved by cutting vital services". Is this still your view? In contrast, we know that value
for money and excellent services can go hand-in-hand.

Tellingly, you have stayed silent as Boris Johnson delivers on his pledge not to take a
penny more from London taxpayers, in his first year as Mayor of London.

As local Conservatives, our challenge to you is to make a real difference this year. Freeze
the council tax. Local people’s jobs, savings and mortgages are at risk in this economic
crisis. Don’t push them over the edge.

As Council Leader, you have the power and the money to make a difference. So why
don't you?

I hope they heed your demand with the council tax, Paul, but somehow I don't think they will. The Sutton Lib Dems who run this council are blatantly idealogically opposed to low taxation.

I have never known it go down, or even stay the same. It seems that for them the only way is up.

And we're paying for it. I support your move on this issue.

Paul. Some years ago I said that the Tories should take out adverts in the Sutton Guardian. I was ignored.

Now I think it's too late. You've wasted your money. Most people I've spoken to today have said it's "cheap political electioneering".

Hope they are wrong!

i don't think i agree, it's good to see people actually calling for value for money for a change. we all pay too much tax to this rubbish council. keep it up