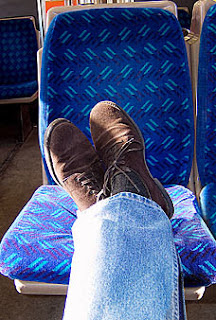 A story caught my eye this morning about Merseyrail taking a young cub scout leader to court for putting her feet on a seat whilst on the train.

Although she pleaded guilty in court, 19-year old Kathleen Jennings was given an absolute discharge by the Magistrate who took the rail company to task for wasting the court's time with such trivialities. Miss Jennings faced a £1000 fine and a permanent record which may have affected her work with children.

I don't like people putting their feet up on the train, not even the ex-MP and captain of industry that I happened to share a carriage with to Mitcham Junction on Monday, but it does appear jobsworthy when she put her feet down as soon as the rail enforcement officer pointed out her transgression.

Merseyrail are the only rail company to prosecute such hardened criminals. I support a zero tolerance to anti-social behaviour but only if this is not in practice a putsch on soft targets to raise easy money. I'm sure a few anti speed camera and parking campaigners will have a view here. I don't know what Merseyrail are like at following up on more serious crimes so it is difficult to have a view with only half the picture. Interesting that they have enforcement officers. I can't remember seeing any on the London-Sutton trains over the years when I have seen school children beating each other up, trains with graffiti etched into the windows, free newspapers shredded and seats broken.

Now, a £1000 fine for people sitting next to me on a train, telling their friend that they are going to see in 20 minutes what they did last night whilst not realising that the beauty of this modern gadget is that the telephone does all of the work for you rather than having to bellow to be heard the other side of London; That's my kind of zero tolerance.

BTW. The photo is not of my feet and yes, I do realise that it looks like two feet coming out of one trouser leg!
Posted by Unknown at Wednesday, September 05, 2007