Who Do You Think You Are Kidding, Mr Brown... 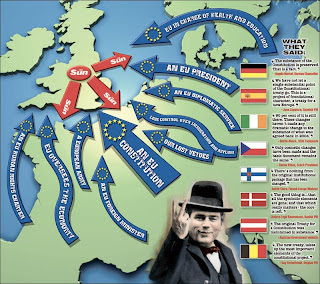 The Sun reacted to Gordon Brown's speech in their usual unmatched style and wit. This "Dad's Army" graphic says it all.

In case you can't read it, the "What They Said" section reads:-

'The substance of the Constitution is preserved. That is a fact.' Angela Merkel, German Chancellor.

'We have not let a single substantial point of the Constitutional Treaty go. This is a project of foundational character, a treaty for a new Europe.' Jose Zapatero, Spanish PM.

'90 per cent of it is still there. These changes haven't made any dramatic changes to the substance of what was agreed back in 2004.' Bertie Ahern, Irish Taoiseach.

'Only cosmetic changes were made and the basic document remains the same.' Vaclav Klaus, Czech President.

'There's nothing from the original institutional package that has been changed.' Astrid Thars, Finnish Europe Minister.

'The good thing is...that all of the symbolic elements have gone, and that which really matters - the core - is left.' Anders Fogh Rassmusen, Danish PM.

'The original treaty for a Constitution was maintained in substance.' Austrian Government website.

'The new treaty takes up the most important elements of the constitutional project.' Guy Verhofstadt, Belgian PM.

Despite this, Gordon Brown insists that the treaty is very different and is prepared to break his manifesto commitment by denying the British people a chance to have their say in a referendum. He insists that his red lines were met. These happen to be the same red lines that were drawn in the original constitutional negotiations.

At the time of writing, 99,332 people have signed up to the Daily Telegraph petition demanding a referendum on the EU Constitution Treaty. You can join them here.

A mighty paper! The Sun is bang on target as usual!!! lol

My God! Cllr Scully and the Tories are finally waking up to the fact that the EU not only threatens our ways of life but is a danger to our freedoms.

You may as well join UKIP Mr Scully or are you trying to jump on yet another bandwagon?

joining Ukip would be the best way to sell the UK down the swanny to the EU. are Ukip so stupid that they dont realise this?they obviously dont care. splitting the euro sceptic vote only sends a pro euro gov like Labour back into the goverment

what was the name of that dim-wit ex conservative councilor who joined Ukip. dont see a highflying political career for him!

anon 8.10: Holly Fester is the name that you are looking for.

Holly Fester 15,41: Why not just stick to the one pseudonym? Anyway, you are wrong on both counts. I have been Eurosceptic since very young. This is not the same as sticking my head in the sand with the UKIP party. Modern geopolitics means that our economic and political future lies with a cordial relationship with European countries. This does not mean a Federal Europe as the LibDems promote, but neither can we approach the EU with the manner of UKIP which will ensure isolation.

Far better to deal with this in bite-sized chunks. The first objective must surely be to ensure that further powers are not handed over to Brussels. The second stage is to bring some powers back to Britain. However there are many issues that can best be tackled at European level.

Therefore in order to get to the first stage, instead of shouting at the sidelines let's stop carping and turn our fire on the Government. I have been consistent for 25 years or so. The Labour Party have managed to make a U-turn within 2 years.

The key fact that UKIP has failed to grasp is that their trenchant Little Englander views make them far too easy to ignore. Pro-Europeans then dominate, pass powers to Brussels and then when people complain they explain it away saying that we handed sovereignty on this and that over to the EU years ago.

We are moving closer to a marriage with Europe with no possibility of divorce. Can't we just exchange telephone numbers and have dinner occasionally?!

I take your point Cllr Scully, but fail to see how we should have any relationship with Europe at all. Why is it that countries such as Norway and Switzerland can prosper by NOT being part of the EU, therefore NOT wasting billions of pounds annually on something which does us no good?

We can still trade with Europe, we can still be friends with Europe, but we don't have to belong to Europe to exist. It seems to me that the Tories want it both ways. Remember it was a "tory" that took us in, Thatcher and Major were both enthusiastic regarding the Maastricht treaty and Cameron belongs to the "Liberal Elite", which constantly want to rule the masses.

Are there any tories with the balls to call for a referendum on actual withdrawal, or are you and your party quite happy with spending the best part of £1bn per week to keep the eurocrats happy?

No doubt you'll be jollying it up at Blackpool next week and rubbing shoulders with lots of "tories" who claim to be eurosceptic and yet do absolutely nothing about stopping the EU juggernaut.

Seeing as this is a day for long postings I thought I'd have my penny's worth!

It is worth noting that the economies of Switzerland and Norway are markedly different to that the United Kingdom - as is the way of life. The same argument applies to the rest of Europe. But we must not forget that Europe is one of our major trading partners, and in turn London is the financial capitol of Europe - whether the French and Germans like it or not.

That si why Britain is so special, it is because we look outwards, unlike the inward looking vanity of the EU. UKIP always strikes me as isolationist, and introspective in an ironically similar way to the very political monolith they wish to disentangle us from.

'holly' says in one breath that he fails to see why "see how we should have any relationship with Europe at all" then proceeds to extol the virtues of being "friends" with Europe and to trade with it. Perhaps this is just clumsy wording but it shows a fundamental inconsistency.

Yes Tory governments have taken us further into the EU and any Tory now regrets this - but we should note how much a lie they were sold and how this is the typical EU-fanatics' tactic the inevitable drip drip of sovereignty, of which the European Treaty is now a prime example. A treaty which the Tory party is rightfully leading the fight for a referendum on.

The EU experiment IS sapping our national sovereignty and the drip drip effect of European integration will damage British interests. That's a fact, but what Eurosceptic forces have to realise is that they need to win an election in order to stop the wholesale political prostitution of the UK to Brussels and UKIP is singularly unplaced to do this. As one of the posts - 'Ross' - above illustrates.

Unproductive grandstanding from UKIP will not stem the flow of power to Brussels, from London. Supporting the Conservatives who wish to return powers, and renegotiate the EU's direction will.

'holly' says in one breath that he fails to see why "see how we should have any relationship with Europe at all".

Yes, but what does Fester say in the other breath!

I can't see that Fester has posted on this subject, or am I missing someething?

I see Scully is so vain he has to have his picture on each post he does.

With regard to the photo, you will see that this is standard when someone logs into their Google account. Why not register yourself, under your real name, raise the tone of debate above the knuckle-dragging, name-calling and finally be proud of your change of party. This level of personal abuse only plays up to the stereotypes that people hold of UKIP members and will do your cause no good. Having said that, as my best customer it keeps my viewing figures up.

LOL! Are you afraid of the UKIP threat by any chance Mr Scully?

I seriously doubt that he is.

Great to see William Hague's pledge at Tory conference to hold a referendum every time an EU Treaty proposes to cede powers to Brussels. At last some Common Sense, almost nine years after Hague first talked of a 'common sense revolution!'

Trouble is Hague is lying to the general public. He knows full well that each EU treaty or document is self-amending, so even if a referendum is granted it negates a referendum on the next amended document. Of course you wouldn't expect Tories to tell anybody the truth, they are just desperate for votes nationally (Cameron) and locally (Scully) who will do anything to convince the general public of their worthiness. Pity they are such bare-faced liars. After all they were the ones who took us into this mess in the first place, but of course they want to keep quiet about that, so that they can feather their own nests and line their own pockets.

and yet it works in Ireland, among other countries.

No reason why such a system wouldn't work here...