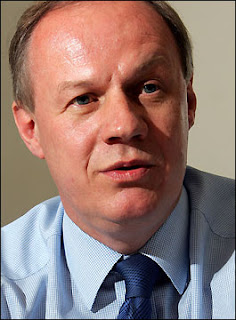 This is Damian Green MP, Shadow spokesman for Immigration. Last night the police took the extraordinary step of arresting him for telling the public that the Government was terrible at tackling immigration.

Conservative Home and Iain Dale have some excellent coverage. He was held in custody for nine hours and his offices were searched by SO15 counter terrorism officers. Meanwhile real terrorists, two of whom it is said were born in Britain were causing outrage and havoc in Mumbai.

The police are not allowed to arrest anyone in the Palace of Westminster without the permission of the Serjeant at Arms. It is disgraceful that this permission was given by the Speaker and the Serjeant at Arms, who is in charge of security in and around the Palace. Nine officers searched his office. Being a senior politician, he would have a better office than I share, but there are few offices that can even hold nine people.

In 1642, Speaker Lenthall told Charles I, "May it please your Majesty, I have neither eyes to see, nor tongue to speak in this place, but as this House is pleased to direct me, whose servant I am.", as the King came into the Chamber seeking the arrest of five MPs. Next Wednesday at the State Opening of Parliament, Black Rod will knock on the door before the Queen's Speech, replaying that seminal moment in British history. It'll be a hollow act after the Government squash 350 years of history for their own shabby ends.

When the issue of 42 day detention and ID cards and suchlike come up in discussion, people often argue that only the guilty have anything to fear. We are not a police state. However, legislation is often misused followed by an embarrassed shrug from a Government Minister. See how many of these examples you remember:-

The usual definition of a Police State in when the Police run the government.

By that definition, we are there.

For an account of what happened when the Police - the Special Branch, no less - arrived at the family home of Damian Green, see this account by his wife, a barrister:
http://www.telegraph.co.uk/news/newstopics/politics/3535180/Damian-Greens-wife-describes-most-shocking-six-hours-of-my-life.html

Can someone explain all this to me please? If it was April 1st I may be able to understand it.

In simple terms, the Police are out of control.

Let's put it this way - Damian Green was fortunate.

He could have been carrying a table leg or in bed when the Police came to arrest him:

"In a small Sussex seaside town, at 20 past four in the morning, James Ashley was sleeping naked in his bed. Seconds later, he was on the floor, shot dead at a range of 18ins, by a police officer using a powerful Heckler & Koch carbine."
http://www.independent.co.uk/news/uk/this-britain/secrets-lies-and-.htmlit-after-police-shoot-naked-man-in-bed-685719.html

For the latest breaking news on the background to this narrative, try this:

If every MP that had ever 'leaked' was arrested there would be few left on the benches one feels!

Among all the furore I was gobsmacked that Radio 4 chose to interview, of all people, Michael Howard, one of the most intolerant Home Secretaries ever and architect of the so-called Criminal Justice Act. To hear his sanctimonious whingeing was entertaining and the thought did cross my mind that perhaps someone Machiavellian in the Beeb had brought him on to satisfy their sense of irony. Anyway if (s)he did it went right over Howard's head. Outrageous as the arrest was and in particular the use of the notorious anti-terror cops, it's been happening to the rest of us for some time, for example the arrest of Maya Evans three years ago after reciting the names of British soldiers killed in Iraq outside the gates of Downing Street. You're all as bad as each other when it comes to letting the police off their leads!
And then there is the Tory threat of a vote of no confidence in the speaker. Anyone with a brain might have deduced that Gorbals Mick was not fit for the office long before now. Remember that last year Martin spent £20,000 of taxpayers' money on libel firm Carter-Fuck (as Private Eye so appositely describe them) to represent him following articles querying his conduct. Martin also exempted his wife, Mary, from security checks in the Palace of Westminster, where they live, and for trying to block details of MPs' £5m-a-year travel expenses being published under the Freedom of Information Act. It suited the Tories to back him then, so who are they kidding now when they try to present themselves as defenders of democracy??
Bob Steel

Michael Howard was also on Newsnight last night and acquitted himself very well.

Removing a Speaker from the House of Commons is near on impossible unless he wants to go. There was an almighty row when Michael Martin was first elected and Conservative MPs have criticised his partisan approach and his lavish tastes which earned him the moniker "Air Miles Mick". I've certainly never heard of a Tory who has defended the worst Speaker in my lifetime.

You can add Maya Evans to the list in the main article. She was arrested under the same legislation that I mentioned in bullet point 5.