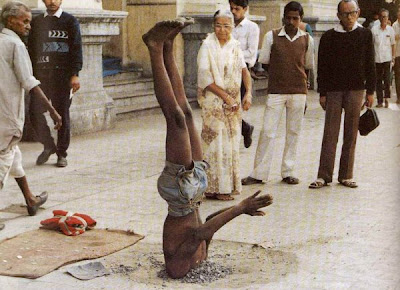 A picture of an ostrich just didn't cut the mustard when writing about the latest on the controversial £8million Sutton Life Centre.

As expected, Sutton's senior LibDem councillors queued up to sing the praises of the Sutton Life Centre.

It was wonderful to have a library that would be open for longer than the one that it would replace, like the one at the Phoenix Centre in Beddington, without mentioning that many users of that library bemoan the fact that it may be open for longer but it lacks one small thing; books.

It was great that we would have a state of the art centre to teach Junior Citizenship, the silver bullet that would stop our young people getting involved in antisocial behaviour and drugs without recognising that such a course already exists in Sutton at one-third of the proposed charge per pupil.

Sometimes, even I am startled at the detachment of the LibDem administration. The Executive meeting on Monday when this was discussed was one such time. The Life Centre might just work. The 40,000 children that need to come to provide most of the income may arrive by the coachload. People may be chasing each other up the climbing wall to get their turn. Starbucks may start sending their trainee Baristas to the Sutton Life Centre to get experience as cappucino follows moccachino out of the cafe door. Kevin Costner built a baseball field in his farm when told by ghostly voices in 'Field of Dreams', "build it and they will come". He built it, they came, but it was just a film. You cannot play fast and loose with public money. It is not appropriate to say that because we have got £4million from a national grant, we need to bend over backwards to match it at a time of financial turmoil, moving money away from education, adult social services and reserves to fill the gap.

If the project falls short of its income target by 20%, the Council will have to find £95,000 each year to keep the place open. The conditions of the grant mean that if the Council sell the building or change its use in the next twenty years, we may need to pay the £4million back. Councillors always have to balance risk. We are still £5.5million light after taking a Treasury management risk in lending the money to an Icelandic bank. This is a risk too far at the wrong time. The business plan is fanciful at best. In order to find 40,000 children to turn up to pay for the building, a massive proportion of children from South East England will have to come.

According to figures contained in the business plan, there are an average of 33,900 children in each year group in schools within the target area of a 1 hour drive of Sutton. The centre is aimed at Years 6 and 8 meaning a total target market of 67,800. The centre needs 40,000 children to come which is 59% market penetration. In order to do this, the plan only allows for a paltry marketing budget of £5000 and £1300 stationery. This does not stack up well amongst organisations with a touch more experience and know-how as this list showing their percentage of their respective markets shows. 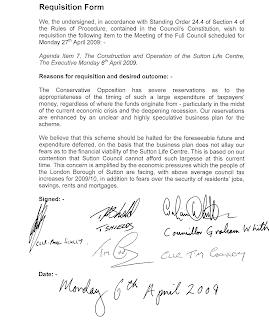 Since, the Sutton Life Centre is pitching comfortably above the most popular man on the planet, the assumptions surely need at least a cursory second glance from someone independant and with something approaching a business brain. The G20 won't be swooping down to the Holiday Inn working how to bail us out if things go awry. Let's get it right now.

At least the Executive have had the good sense to bring the decision to a meeting of the Full Council before we did. We had our form ready to call-in the decision but it was not needed as the LibDem councillors realised that pushing this through would be one step too far.

The Full Council meeting is on Monday 27th April starting at 7pm. It is held in the Civic Offices, St Nicholas Way, Sutton, SM1 1EA. You are most welcome to come along and see where your money is going. If you use Facebook, you can add your voice by joining the group Unaffordable: Shelve the controversial £8million Sutton Life Centre! and just as importantly, please invite all of your friends to do so. If 3003 people can want Wizard man to switch the Christmas lights on in Sutton, I really hope that a few people are moved enough to try to save a few million quid of taxpayers' money. The message needs to be sent loud and clear: the public purse, filled with taxpayers' cash, should not be the plaything of politicians.

Is that man with the glasses the eponymous Councillor John Drage?

Great work Paul and the team. Time to stop this folly in its tracks.

.......yes! Hear! Hear! Once again the Lib-Dems are playing fast and loose with tax-payers money in the borough. Drage's protestations in this weeks Guardian cut no ice with me. Another excuse for wasting money. They should hang their heads in shame.

Crazy, crazy stuff and must appear callous and insulting to those struggling at the moment to see millions spent on something which is tantamount to a vanity gold statue akin to a mildly deranged Roman Emperor.