I'm The Only Voter In The Village 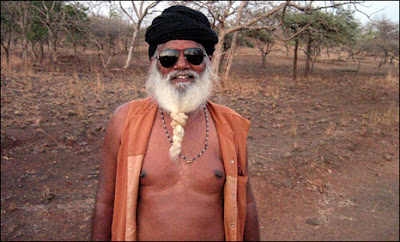 Entitled 'One Man, One Vote', the BBC has got a great story on their website. Not about electoral reform or Robert Mugabe's latest twisted bid to retain power, but about the forthcoming Indian elections.

This man is Guru Bharatdas Darshandas who looks after a temple in a forest in Western Gujarat. He has a polling station to himself for next week's General Election. On 30th April, five polling officials accompanied by two policeman will travel to the Gir Forest to pick up his ballot. I know that the Indians took to bureaucracy like ducks to water when the Civil Service system was introduced under British Colonial rule. However, it is amusing to see that they have kept up with current British practices of public sector job creation. I await a new rash of "How many ... does it take to change a lightbulb?" jokes. I wonder if Mr Darshandas refuses to tell intrepid canvassers, who brave the resident Asiatic lions, which party he supports?
Posted by Unknown at Wednesday, April 22, 2009

I hear a rumour he plans to abstain...

Is it a secret ballot?