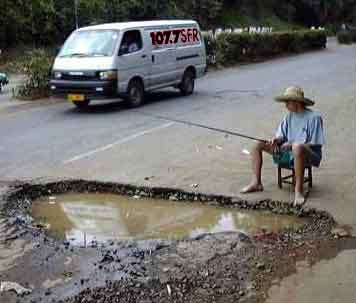 The BBC reports that a Parish Council in Essex has asked that potholes be left unfilled for a while longer in an unusual bid to slow traffic. Representatives of the village of Navestock claim that they are the original traffic calming measure and so want to leave them unfilled for a year.

They seem to have read the first chapter from LibDem Sutton's book on traffic management where the winter maintenance budget has been cut and speed humps sprout like wrinkles in Nora Batty's stockings. However they haven't got to the bit where Conservative Councillor Cliff Carter led the calls for potholes to be tackled and secures £250,000 of funding to tackle the worst ravages of the recent snow and ice.

I seem to remember the pothole theory being tried before somewhere in the South West but have not heard any recent updates where it has been rolled out across the UK with a fanfare so I guess it wasn't so popular. Not all of the village are in agreement with a local retired police officer saying that 'it beggars belief'. Essex County Council agree with the copper and are bringing in the tarmac as I write. The potholes may calm the traffic but I doubt if they have the same effect on the drivers.
Posted by Unknown at Thursday, April 16, 2009

Capital idea but needs augmenting. Leave abandoned vehicles where they are dumped, lorry spills and broken down buses in situ and there is the basis of a fine traffic calming policy! Either that or cut out waste of money projects (Sutton life skills centre?) and cough up the money necessary to do the job properly. I am often told that "The three RRR's" are paramount to local citizens, Roads, Rates and Rubbish.

Just to let you know that the photo of the straw hatted youngster in the photo, fishing at the pothole with a 107.7SFR van in the background, is my brother Jamie Manuel from Kenya, fishing in a Zimbabwean pothole (as a joke) after a successful catfish expedition, to contact him ring +254 719788128!! (to congratulate the bush kid of course!)