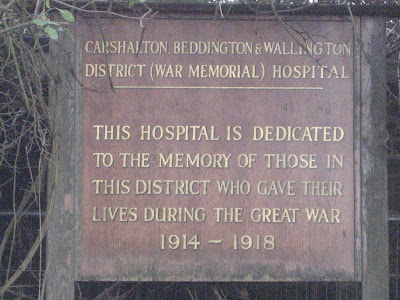 Last night, around 50 residents came to a public meeting in All Saints School, called by Conservative Parliamentary candidate Ken Andrew to talk about the future - or lack of it - of the Carshalton War Memorial Hospital.

Ken spoke of the history of the hospital, built by public subscription following the Great War, what it meant to residents today and the effect that its loss would have.

Andrew Grimes from the NHS gave a presentation about the overall programme of changes for healthcare in the area. The War Memorial was one part of a far wider-ranging project. You can see a copy of his handout here. He explained how although Carshalton was getting a good deal from the changes, it was decided that the Intermediary Care beds that had once been planned for Carshalton were being put into the Wilson Hospital in Mitcham. Andrew explained that no decisions had been taken, although the business case for the changes has been given to the powers that be for approval.

I added some points that I have made several times before, including the fact that it was like selling the family silver with the land lost to public service forever. The NHS change their mind on healthcare provision as often as a Jimmy Choo devotee changes her heels. If we continue to shed sites like this we will end up with the predicament that residents in the west of the borough find themselves in. Worcester Park has seen a lot of house and flat building in the last few years. There is a massive shortage of GP places and school places but no land to fix this infrastructure problem. Since I live in Salisbury Road, I also joined the residents in their additional concern about what will go in its place and the effect on the area. As I have reported before, Cedar Close is involved as part of a land swap to maximise the revenue available to the NHS as well as getting more modern facilities for the present residents with learning difficulties.

Residents then had plenty of opportunity to raise their concerns. Some of the more elderly neighbours questioned the legal right of the NHS to sell off the land. I have been promised the legal opinion obtained by the NHS. Others believed that the lack of intermediary care in Carshalton would push patients back into their homes prematurely. We have been promised a further public meeting about such care matters in the near future. The feedback from the meeting was positive with residents able to get their views across. I've had a pop at the poor communication from the NHS in the past, but Andrew Grimes did a difficult job very well for the NHS. I hope that the decision makers continue to listen and take heed.
Posted by Unknown at Wednesday, April 01, 2009