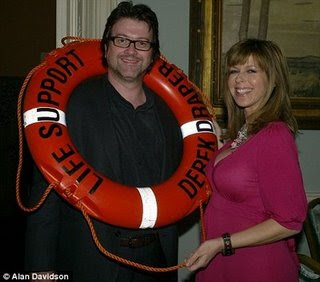 I've left so-called Smear-gate to the Westminster Village experts until now but there are a couple of points that don't seem to have been picked up by the political mainstream.

Firstly, one point from the unlikely political analysts popbitch.com; a website more used to throwing muck around about celebrities.

"The News of the World landed the McBride-Draper Tory smear email story so it was weird to see on Sunday they didn't run with it on the front page. Instead the tabloid had a bizarre headline, "Obama's brother in sex quiz", which sounds like something Jacqui Smith's husband would watch on TV, but was in reality a random story about Obama's half-brother being refused a visa to enter Britain.

Even more weirdly, the story was not written by a NOTW journalist but bylined Gloria De Piero, GMTV's Political Editor. De Piero is a close friend of Derek Draper, a colleague of his wife Kate Garraway, and an ex-flatmate of Damien McBride's then-boss Tom Watson.

So, surely a coincidence that this was the front page story? Otherwise I guess we'd have to assume that the uncalled for and unnecessary smearing of the family and reputation of the world's most popular politician is acceptable to the Labour Party now?"

Secondly as a footnote, it is ironic that Gordon Brown has been caught out by the release of the content of personal emails just a few weeks after a law has come into effect allowing the Government access to the contents of every personal email sent in the UK for up to a year.

Finally Gordon Brown seems to be taking media lessons from John Prescott. He finally gave an apology of sorts today and said "I take full responsibility for what happened. That's why the person who was responsible went immediately." It surely doesn't take a Cambridge PPE graduate to find a hole in that reasoning and wonder why Gordon Brown is still Prime Minister. I'm afraid it is just symptomatic of another statement of empty words drafted without thought.

This is the second worst cock-up of Gordon Brown's Premiership, the first being the bottled election. Both have been caused by his biggest fundamental weakness, his hatred of political opponents. He can play the big stage, whether it be terrorism, floods, foot and mouth or economic crisis. However, when he has the Conservatives in his sights, he is like a child in a sweet shop and cannot help himself. I was only 11years old when James Callaghan lost the election but despite the Winter of Discontent, this seems even more like someone who needs to be put out of his misery. Please, someone spare us and find him a soft exit now.
Posted by Unknown at Thursday, April 16, 2009

Cambridge don't offer PPE, the inferior other place does.

Doh! I went to Reading to do Chemistry & Food Science so what do I know?

I am planning our election party as we speak. It will be the best party since 1992!

PS Cambridge and the other place will soon be overtaken by the new universities. Clinging to outdated snobbery (usually in Latin) is no way to run a university in the 21st century.

a dark room, a fine scotch malt and a pistol with one bullet in it sounds good, with his record he would probably miss