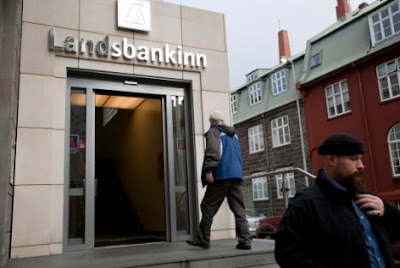 A group of MPs has criticised councils for ignoring the warning signs about the Icelandic banking system. The BBC reports that the all-party Communities and Local Government Select Committee said that complacency, lack of expertise and inaction all helped put taxpayers' money at risk. The Local Government Association defended councils saying that they had received poor advice.

Sutton lost £5.5m after investing in Heritable Bank, a UK subsidiary of Landsbanki. Lead Councillor for Resources John Drage has dismissed each of the accusations over the last year despite admitting that he himself, had taken his eye off the ball. Cllr Drage is a retired Bank of England economist, working through the collapse in Japan in the nineties. When Cllr Drage fell asleep on the job, this smacked of complacency and robbed the authority of some expertise, leading to inaction, thus fulfilling all three of the accusations included in the report. End result? Sutton taxpayers are £5.5million worse off for the time being, with the latest prediction that we will lose £1.1million and get the rest back in a few years.
Posted by Unknown at Thursday, June 11, 2009