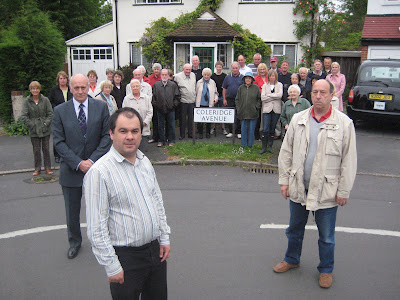 At the last Development Control Committee, residents from the Poets' Estate made their feelings known about the latest in a string of applications to knock down an attractive house and build four houses in the garden. You can see from the number of residents in the picture, alongside Eric and Paul Kelly, that it isn't just a few Nimbys complaining.

The application is wrong for a number of reasons. The house is situated on a tight bend. Up to eight cars coming in and out would present a real danger. There would be intolerable disturbance to number 38, next door. The garden often floods as a result of underground culverts that remain from the redirection of a brook that gave Brookfield Avenue its name. Two of the houses would be built directly on the affected area. I wouldn't fancy buying one.

Finally, this is back garden development of the worst kind. Both main local parties have talked a good game about being against such planning applications. Both parties need to put their money where their mouth is and act.

I spoke to the committee about these problems. They were being asked to make a decision without knowing about the flooding, without any details of the ground levels and so the ridge levels of the housing and without details of protective landscaping. I was able to persuade them that they really cannot take a decision with so many unknowns and they decided to defer the decision until they could clarify these issues. Eric and I will keep local residents informed about progress and the date of the next meeting.
Posted by Unknown at Wednesday, June 03, 2009