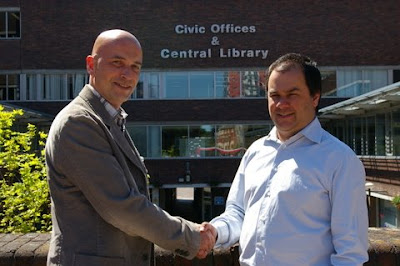 Following the death of my colleague and friend, Chris Dunlop, the by-election to elect his replacement in Nonsuch will be held on July 2nd.

We are really lucky to have an excellent candidate, Georg Braun, who lives in the heart of the ward. He has four children who go to local school, runs his own business and lives in Hampton Road which is used as a rat-run to avoid Central Road. This all means that he has a good grasp of the issues for people in North Cheam and Worcester Park. He shares the same issues on a day to day basis.

Georg has already hit the ground running in Nonsuch. Literally in his first five minutes of campaigning for the by-election he found three severely blocked drains due to longstanding neglect by the Council and called them in. He's also signed up to our Freeze The Tax campaign at http://www.freezethetax.org.uk/. He's a local guy with local priorities. He'll make a fantastic addition to the team and a strong voice for Nonsuch. I know he'll work hard to carry on Chris Dunlop's positive approach to local politics.

Georg told the local newspapers "I'm not your typical politician but Chris showed me how important our local representatives can be. His positive approach to our area has inspired me to stand for election. I hope I can count on residents' support in continuing his legacy of making a difference.

"Nonsuch Ward - covering North Cheam and Worcester Park - is forgotten by this Council. We're almost always at the back of the queue for help from Sutton Council. Our area needs a positive new vision. A Conservative-run Council can provide it and I will be campaigning for it."

You can catch up with news from the area and his jottings from the stump throughout the campaign via his blog, changeNonsuch
Posted by Unknown at Tuesday, June 09, 2009