Police Called In Over LibDem Leaflet 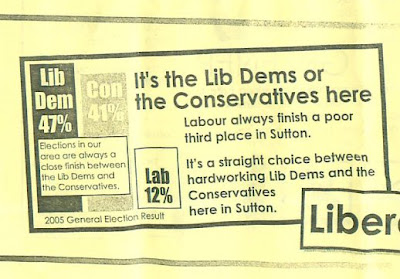 According to the Sutton Guardian, police have been called in by a Sutton resident on a contravention of electoral law by the LibDems. Regular commenter on this blog, Adrian Short has asked the Special Crimes Unit to investigate Paul Burstow and Tom Brake over claims made in their European election literature which I commented on this morning.

You can see the whole article via the link above but I have reproduced a snippet below:-

Mr Short said: “Let me be very clear that I am not a lawyer and I am not saying that anyone has broken the law.

“However, in my reading of the law, I have formed a suspicion that the law has been broken and, as with all suspected crimes, I have reported it to the police.

“Regardless of the outcome of the legal process, I think it’s very important that people understand that, whichever party they vote for on June 4, their vote will be equally valuable and will help their preferred party to gain MEPs, entirely contrary to what the Lib Dems’ leaflets are saying.”

Bob Steel, the Sutton Green Party chairman, added: “The leaflets are deceitful and patronising.
"They will only further corrode trust in politicians, already at an all-time low.

“Lib Dems apparently have such a low view of their European performance that they devote 90 per cent of their leaflet to trying to dupe voters they are electing Tom Brake to deal with local issues like recycling.”

I agree with Bob Steel. It is disappointing that after nearly quarter of a century running the Borough, the LibDems have run out of steam to such an extent that they feel the need to prop up their remaining hopes through such means. They have asked for proportional representation for years. Now they have it, they seem to have decided that they don't want to use it after all. If politicians can't be straight with the public about something so basic, what trust can we have left in them.
Posted by Unknown at Thursday, June 04, 2009