24 Hours Is A Long Time In Sutton Politics 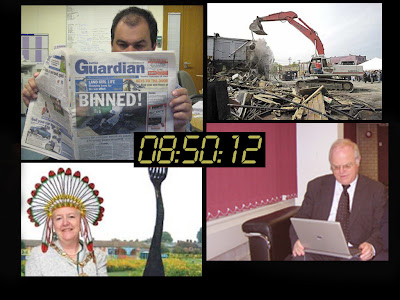 In the US television series "24", Jack Bauer gets everything wrapped up, saving the world in just 24 hours. Back in the real world, it takes the same amount of time for LibDem councillors to realise that they shouldn't be examining their masters' decisions without having the full facts in front of them.

The Liberal Democrats took the odd decision to scrutinise how the controversial £8.5million Sutton Life Centre was going only one day after the decision was taken to build the thing. As I'd had 24 hours to read the financial information that was supplied just ahead of the council meeting, the previous evening, I asked several questions based on these papers, including why fees and surveys represented such a high proportion of the total project cost, and why Sutton Council was taking £279k in consultancy fees from its own project.

Lib Dem Cllr Myfanwy Wallace asked why I was the only councillor with this paperwork as she found it difficult to scrutinise the project without it. When I could lift my head from my hands, I exclaimed that it was a shame that she did not pipe up at the Council meeting the day before. It is extraordinary to think that councillors think it is OK to put their hands up to spend £8.5million without the full facts but not when they are asking a few questions after the event, when the builders have gone in. Although I asked about the fanciful expected visitor numbers, the rest of the session rarely lifted above whether jacket potatoes would be served in the cafe. I despair!

The part of the meeting about paperwork can be heard via the box below. The voices that you can here are Cllr Myfanwy Wallace, Cllr Roger Roberts (Chair) and Cllr Graham Tope (Lead Cllr for Community Safety, Leisure & Libraries), all LibDem:-