Last week the G20 calmly agreed to spend $1 trillion on trying to bail everyone out of the mess that we are in. Reports suggest that the UK's debt is set to surpass £2trillion. Somewhere along the way, people become detached from these impossibly large figures. This includes Ministers who bandy them around as tokens rather than people's hard-earned money. There are ways of illustrating these figures, such as the Conservative's "Dad's Nose, Mum's Eyes, Gordon Brown's debt" campaign which calculated that every child born in the UK has £17,000 debt. Even this is difficult to take in. I've found a general example to illustrate $1trillion.

$100 is the highest denomination bill issued in the States. 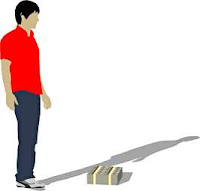 $1 billion starts to pique the interest of government ministers.

...........Is the final picture by any chance the total remuneration of the noble Lord Tope for the past 12 months?

how big would the pile be for the Sutton Life Centre??