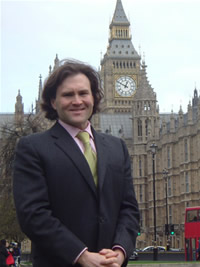 Siôn Simon, Labour MP for Birmingham Erdington made a bit of a prat of himself in this video on You Tube and then later on Sky News. Whereas I thought David Cameron's WebCameron blog is a good attempt at bringing a fresh approach to communicating with electors (as are Labour MP Tom Watson's videos, also on You Tube ), Siôn Simon does not seem to have left student politics behind. Some Conservatives have got hot under the collar. David Cameron's website has reported a massive increase in traffic since the news story was reported.

Personally, I enjoy satire about any party including my own. I just prefer it to be funny.
Posted by Unknown at Friday, October 13, 2006