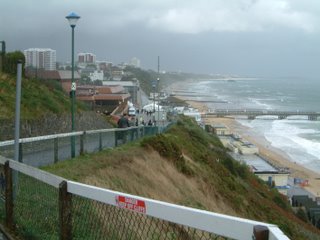 The weather was foreboding, thousands of people were left stranded without a pass, but despite this most people left with a confident air. David Cameron's speech on Wednesday was a major landmark. It didn't reach the high benchmark that Blair had set the previous week for rhetoric but it resonated for a very different reason. Cameron received applause for saying things that you could never imagine a Conservative leader saying maybe even two or three years ago.

There is plenty more to do. The shakes of the head by some when he addressed civil partnerships show that not everyone is going in the same direction or at the same speed. However the NHS is the subject that stands out. For too long this has been the sole reserve of the Labour party. Remember "24 hours to save the NHS" in 1997. Cameron spoke of the man that he met that had worked in his job in the NHS for the past 12 years. In that time, there had been so many reforms and adjustments that he had to reapply for his job a ridiculous 7 times. Just one example of the waste in the Health Service. Yes, funding has increased but the amount going to frontline services has not gone up in anywhere near the same proportion.

Policies will come after the various commissions have reported back but it is important nationally as it is here in Sutton, that we show that we are ready to confront the challenges that we face today, not revisit those of twenty years ago.