Things Can Only Get Better... 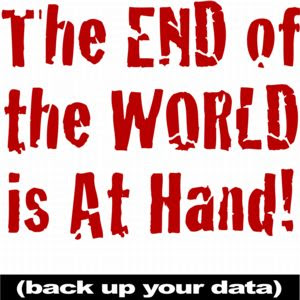 ...or there again the planet might just get eaten up by a black hole. Which side of the argument are you on?

The Large Hadron Collider at CERN is being switched on today. The machine which lies under the border of France and Switzerland will send photons around the 17 mile long circular tunnel at 11,000 laps per second in order to try to see theoretical subparticles such as the Higgs Bosun particle.

All good useful stuff. The point is to try to recreate the moment just after the Big Bang. However, reading the small print, some scientists have a slight niggle in the back of their mind that the process might create a black hole that will destroy the Solar System and have been trying to stop the launch through the courts.

I didn't have any truck with this argument, favouring the reasoning that similar collisions happened in the atmosphere all of the time without such cataclysmic results. That was before I discovered that one of the scientists behind the project was Brian Cox, the former keyboard player with D:Ream. Politicos or 90s music specialists will recognise this group's greatest hit as "Things Can Only Get Better" used as Tony Blair's campaign anthem in 1997. Things didn't, I'm still waiting for my money back and has he done his research a little more carefully 11 years on. Maybe it's not quite time for walking around with an "End of The World" sandwich board yet?
Posted by Unknown at Wednesday, September 10, 2008

Other Black Hole songs could be:
The End (Doors/Beatles)
End of the World (REM)
(There is definitely a Black Hole at All Bar One in Sutton already, I know this as every time I go in there all my money vanishes never to be seen again!)

Gordon Brown, if he had any conscience, would perform
All Apologies (Nirvana)