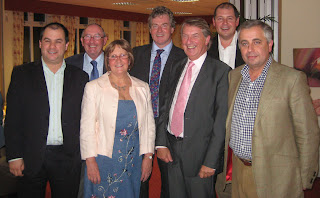 Peter is the Shadow Secretary for Environment, Food and Rural Affairs - not many ministries have snappy titles- and so has a strangely diverse portfolio from Climate Change to nuclear waste, Foot and Mouth to fishing.

In a Question and Answer session, Peter told us that that the Lisbon Treaty was a dead treaty having failed to be ratified by Ireland. He explained that aviation emissions need to be looked at in the context of Heathrow expansion as it is one of the fastest growing sources. He also supported carbon capture in the North Sea as a mitigation for emissions caused by energy generation. Peter was in a buoyant mood despite arriving on a crutch due to a sporting injury, optimistic about the future of the party and looking forward to serving the country in Government.
Posted by Unknown at Friday, September 12, 2008

What a shame that the "Tories" are now in favour of scrapping the 3rd runway at Heathrow.

Still anything to appear green eh Paul? Sod the economy, let's garner as many votes as we can by appearing "green". What a joke.

How sad that the party that was once for business is now in the process of garnering any votes it can by appearing "green".

The only "green" people are the ones that will be "green" enough to be fooled by the Tories.

London Heathrow is the only airport in the world that has the stack directly above the main city. I like Boris' idea of looking into a new airport in the Thames Estuary. As well as having the space to plan an airport that befits its role as one of the world's busiest, it will help to kickstart the regeneration that is floundering in that part of London and Essex.

I'm not sure what grounds you have for saying that the Tories are not interested in the economy. Environmental issues are important whatever side of the climate change debate you come from. Remember twenty years ago when the Thames was so heavily polluted and the Houses of Parliament were all but black. We don't want to go back to that. Encouraging and helping people (not bullying) to live a greener lifestyle can only be good for our quality of life. This will only work if it fits in alongside a flourishing economy.