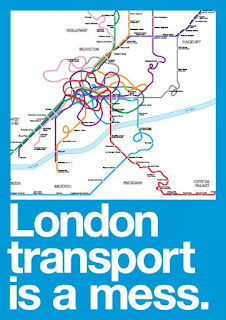 I've just caught up with last Tuesday's debate on Newsnight with Jeremy Paxman interviewing the three leading candidates which you can see on BBC iPlayer for the next two days.

Three transport points stuck out for me. Firstly Brian Paddick unequivocally stated that he would scrap the Western extension to the Congestion Charge. This is a good thing since the Mayor introduced it in the face of opposition by the majority of residents. However the LibDem candidate failed to point out that he would replace it with a peak time congestion charge stretching over the vast majority of Greater London, the boundary being the limits of the Low Emission Zone. Woe betide anyone who lives in Worcester Park which would be split in two with this proposed charge.

The second two were about bendy buses. When confronted with the fact that bendy buses kill more people than Routemasters, Ken Livingstone explained that this was not because they were long, but because more people fell underneath them; an oblique and somewhat blinkered response. I've seen a few near misses with pedestrians toes - fortunately nothing more serious- as the buses turn corners.

Boris Johnson pointed out that bendy buses were hotbeds of fraud with some £8m of fares being lost. I have rarely used a bendy bus in London but used them frequently over the last few days in Rome - did I say that I had been away on holiday:)? There, the buses were packed, making it physically impossible for anyone to validate their ticket unless they happened to be pinned against the machine and feeling dextrous.

Click on the picture to see the full transport leaflet from Boris.

Since the election imprint was on the second page of the transport leaflet, I've added one below to cover the document cover shown above.
Promoted by Ian Sanderson on behalf of Boris Johnson, both at 30 Millbank London SW1P 4DP
Posted by Unknown at Sunday, April 13, 2008

Paul, also worth noting that Boris Johnson has the excellent policy of providing injured servicemen with free bus travel.

Amazing that everyone concentrates on the "3 main contenders", but then it's only natural I suppose. Gerrard Batten, however, the candidate for UKIP also has a long list of sensible policies that people are interested in. We advocate scrapping the congestion and low-emission zones charges compleetely. No pussyfooting around like Johnson/Paddick, a bit here and a bit there. Local businesses who pay business rates would be given a vote, and UKIP's national policy calls for the Olympic precept to be shared with the whole country not just London.

Johnson/Paddick have a long way to go yet, but I must admit Johnson does have some reasonable ideas.

Personally I am no fan of the congestion charge in principle but the air quality in central London can frankly be awful. On that basis I do think we need to do something about it.

I do think it's great that Boris wants to implement this policy for injured servicemen. I'm very sad that our soldiers are often treated so badly by the system, despite the massive service they give.

Paul - stay off the bendy buses they are rubbish. Whenever I'm in London I try and walk as much as possible. Maybe that's Ken's environmental tactic, make public transport so terrible and expensive that people are forced to walk.

I really hope Boris wins. A fresh perspective is needed. People really need to make a choice, only Boris can realistically beat Ken. This would be a major frst step to making London an even better city. I can't help but look at Tory run Council's like Wandsworth and feel jealous. They have the lowest Council tax, yet boast the best public services, and they are consistantly rated as excellent and improving by the Audit Commission. The Conservative MP there has managed to get extra tubes running on the district line for her constituents. What have the Lib Dems done here... Well they gave us that ridiculous bus stop outside the St. Nichollas' centre (remind me, was it 500,000 or 750,000 of Council tax payers money that was wasted there?)

RFK – I do like your comments, then as I am a Conservative Councillor that will not surprise you.

You refer to the Conservative MP who has done so much for Wandsworth. You are very right, Justine Greening epitomises what a Member of Parliament should be and should do for the area they represent. This highlights an area that many just fail to understand. If your representative has not got ‘clout’ it matters not how hard they work, they will not achieve for you.

In Sutton and Wallington we have seen this for many years now. Both the MPs are Liberal Democrat and therefore have not had the ear of anyone more influential than Charlie Kennedy or Menzies Campbell.

Sadly, it is true that one of these MPs is a highly intelligent capable and respected individual – who has been unable to achieve anything of note for his Constituency. The other has the intellect and social skills akin to a vacuum cleaner (if you know the area you will know to whom I allude and you will also know that I am being generous to him and rude to vacuum cleaners!).

We regularly hear about candidates for the lesser parties, for example, Sian Berry of the Green Party, Gerald Batten of UKIP or Bob Bailey of BNP, the other extremist party represented in the Mayoral elections. The unavoidable truth is that whatever the respective merits [sic] or idealistic policies of the lesser parties, it is pie in the sky as these polices will never see the light of day.

If you actually want your opinion to be acted upon rather than just seen as a hollow protest vote you need to vote for one of the two main parties (and if you do vote for Livingstone/Labour the men in the little white coats just might come looking for you!!)

Barry - Spot on. I remember not long ago Justine Greening MP released youth on youth crime figures for London, that she had collated. One of the Lib Dem MPs you mention (not the intelligent one) got hold of the figures and put out a press release stating his 'concern'. Not only did he not actually do anything to obtain the figures (except read about them in the evening standard), all he did with the news was waffle. No action, just spin. I also continue to be bemused that the same Lib Dem MP claims a strong environmental record, when it appears he voted AGAINST a cap on the number of flights from Heathrow!

We need action not rhetoric. Boris is the man with the plan and hopefully he gets in - we really need someone in a position of authority that can do something for our Borough.