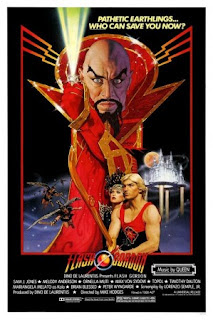 We are only a few weeks away from the first Prime Minister's Question Time when we will see Ming the Merciless battle against Flash Gordon. In the meantime, everyone's attentions are turned to Gordon Brown and the farewell tour of Tony Blair.

Ming Campbell has attempted to attract some attention by proposing a policy that is eye-catching for all the wrong reasons. He thinks that councils should refuse planning permission for farmers to develop their land, then buy the land at a discounted rate, give themselves planning permission and then sell it off at a profit.

The poster on the right says "Pathetic earthlings...Who can save you now?" What planet is Ming living on that he can think that this could ever be a serious proposition. Blackmailing farmers by saying that planning permission will only be given if they sell-up to the council and having that same permission granted by the very authority who are seeking to benefit is one step away from a Mugabe-style Land Grab. I'm sure that many LibDems will be hoping that he was having a senior moment and it will be forgotten as quickly as the actor who played Flash in the '80s remake.
Posted by Unknown at Thursday, June 14, 2007