Beyond Carshalton to Sri Lanka 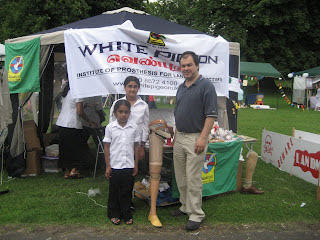 Another stall at the Carnival had the right mixture of fun and games, underpinned by a harrowing international message.

White Pigeon UK is a charity working to rehabilitate those disabled by landmines in Sri Lanka. The ongoing hostilities between the Sinhalese Government and the Tamils who seek an independant homeland in the north continues to take its toll on ordinary citizens including many children.

The game alongside the stall was to walk through shredded paper without bursting any of the balloons that lay underneath. This illustrated the dense undergrowth where landmines remain concealed, long after they were originally planted, waiting for an unsuspecting innocent.

Since there were only balloons, I was happy enough for my daughter to have a go! She won a prize and learned a valuable lesson.
Posted by Unknown at Saturday, June 09, 2007