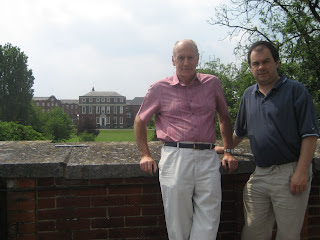 Sorry about the pun, but Eric and I had a joint family outing to some of the treats of Carshalton including the Water Tower on West Street. I've gone past it so many times over the eighteen years that I have lived around the corner but not ventured up.

For the bargain price of 75p, we were rewarded with spectacular views of the grounds in St Philomenas and the old Carshalton House which is now the school's main building. The fact that we were also afforded aerial views of the red splurge that is traffic calming in West Street shall be painted out of my memory in much the same way as the black asphalt has been, under the over-eager workmen painting the town red.
Posted by Unknown at Tuesday, June 12, 2007