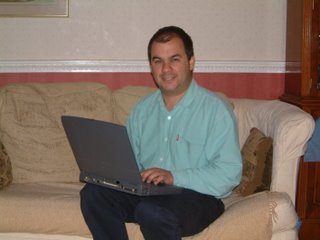 Despite the photographers' best efforts, I wasn't able to exude for the lens and looked half asleep. Richard Lyon's sharp eye noticed a photo of my garden with the ladder that I had forgotten to put away. But hey, I'm being picky. I came home to an excellent article in today's Sutton Guardian about the rise of the political blogs in Sutton, which I have covered in an earlier post. Since it hasn't gone up on their webpage yet, I have copied the text here. To spare the public and avoid incurring the wrath of the Guardian lawyers, I have put one of my own photos alongside.

Posted on the internet is a photograph of Conservative councillor Paul Scully’s back garden.

It is a rich, green affair with a well kept lawn and borders of shrubs. On closer inspection you can clearly make out a yellow whirlygig clothes dryer and, at the bottom, a big black trampoline. Next to the photo, which also shows a white parasol and a discarded ladder, reads the words: “The picture shows the view from my bedroom window”.

As if to remind us the site is not some kind of councillors-homes-through-the-keyhole, the text goes on to discuss the issue of back garden development. OK, so we may still be in the realm of local politics, but it is not politics as we know it. Welcome to the brave new world of political blogs.

Taking the lead from national political blogs and the webcam diary of David Cameron, a growing number of local politicians are starting their own online diaries. Mayor of Sutton Richard Bailey gave out the web address of his blog at a meeting of the full council this month and councillor Cohn Ball and former councillor, Charlie Mansell are also established bloggers.

Claiming to be the first however, is Coun Scully who is aware of the medium’s ability to let the public know what councillors are doing almost as soon as they’ve done it. And what is more he adds, blogs can break down barriers between politicians and their constituents, allowing them to get to know the person in a way never quite achieved before. “I think blogs give an immediacy and an intimacy,” he says. “When people vote for you they generally vote for the party and few people know the individual. I think it’s important they get to know the individual because you may have particular political issues and problems and if they know you have a similar outlook as them they may be able to trust you more.” Coun Scully’s first posting was on May 29, 2006— just three weeks after being elected and bore the title ‘Does cyberspace need another blog?’ Since then he has written a total of 37 entries covering everything from the future of Westcroft Leisure Centre to whether classroom assistants should wear veils.

Much less prolific, by his own admission, is deputy leader of the council Cohn Hall, who left a month between his last posting and the previous one dated September 27. But despite this under-use of his cyberspace presence, he remains extremely enthusiastic about what blogs can achieve - particularly in terms of connecting with the community. “I have had more response from doing more things on a blog than I’ve had from all the leaflets I’ve done in all the years I’ve been councillor” he says. “If I put something up on the blog I might get half a dozen emails about it which is great. The more I can engage with the residents, the better.”

There is also a suggestion the more successful blogs could start to challenge newspapers by breaking stories before journalists. Fortunately for the Sutton Guardian, there is little chance of that happening in this borough. What the blogs of our councillors do seem to demonstrate though is that the internet can bring people closer together — even the public and politicians. “I think it has the potential to change politics and make politicians more human because we do seem a very strange breed,” Coun Hall says. “The potential is there but we need to take it up a level. More councillors should start blogs.”
Posted by Unknown at Thursday, November 02, 2006