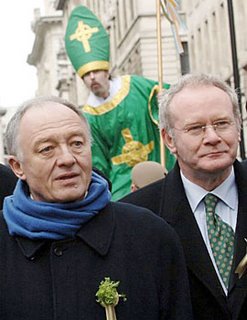 Today saw two announcements from City Hall. Mayor Livingstone explained that he would be increasing the Congestion Charge for 4x4s to a rip-roaring £25 per day. He is using the same banding that Gordon Brown devised for vehicle excise. If he applies the same lack of forethought as LibDem Richmond, then 1.6l cars will find that they are finally taxed off the roads of London.

Unfortunately, these taxes are a double-edged sword. I have written elsewhere that green taxes are worth further investigation but I suspect that such a scheme will mean lighter traffic for the rich that will be only too happy to pay an extorionate amount to remove others from the roads.

The Mayor, in the meantime thought nothing of spending £36,000 of our money and sending about 8 tonnes of CO2 into the atmosphere for a five day jolly to Cuba and a trip to Venezuela that was cancelled at the last minute because President Chavez was too busy to see him. The only official business was a 30 minute press conference at an Olympic conference in Havana.

Having said this, the Mayor is mindful of value for money when he tells us "The costs of my visit to Cuba are modest and in line with the costs incurred on other Mayoral trips." So remember that when you look at the Thomas Cook brochure. But what has he learnt from the trip? Apparently London has much to learn from Cuba about producing Olympic boxers. You couldn't make it up.
Posted by Unknown at Tuesday, November 14, 2006

This is the same Mayor making plans to celebrate the 50th anniversary of the Cuban revolution in 2009! With public money, of course! Perhaps that what he was talking about?