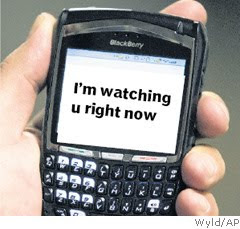 Since starting a new job in Westminster, I've found it both hard to get the time to blog and to see much evidence of anything happening in Sutton bar increases in councillors' allowances. Having got out of the habit of thinking about council work as soon as I woke up, a few text messages received this week from a single anonymous texter (07812 984365) brought it back.

5am, 14/7/10
HI SCULLYWAG. HOW'S IT FEEL TO BE PLAIN MR INSTEAD OF COUNCILLOR? DUMPED ON THE SCRAP HEAP BY YOUR NEIGHBOURS, VIA THE BALLOT BOX. YOUR CHANCE OF BEING RE-ELECTED WOULD BE BETTER IN BURMA! GOODBYE TO YOU!

8.50 14/7/10
CAMERON SHOULD LOOK AMONGEST THE ETON TOFFS FOR CUTS. INSTEAD OF HAMMERING THE POOR. THATS WHY YOUR NEIGHBOURS DIDN'T VOTE FOR YOU. THEY KNOW THE TORIES ONLY LOOK AFTER THE RICH. GOODBYE TO YOU!

18.38 14/7/10
I SEE BARNET TORY COUNCILLORS HAVE GIVEN THEMSELVES A HEFTY PAY RISE. TYPICAL OF YOUR MOB. DO AS YOUR TOLD NOT AS I DO. GOODBYE TO YOU!
(all capitals, punctuation and spelling, sic.)

I don't know why someone feels so moved to start having a pop at five o'clock in the morning, two months after the election, but it is intriguing that people feel that people who volunteer for public service are fair game for this, though I admired the poetic sign offs. At least they got it off their chest and I hope that they are happier for it.
Posted by Unknown at Sunday, July 18, 2010

Whoever your 'secret admirer' is, Paul, they are, as you say, a little behind the times. Either that, or the network service is getting worse...

Know of any disaffected Tories who've been on holiday for two months?

Let's hope their tendency to say 'goodbye' is permanent!

Googling that mobile number actually delivers a rare googlewhack - just a single answer, which is your blog.

As Oscar Wilde said "Its better to be talked about than not talked about" At least it proves you made a big impression!

One of the most fondly remembered facets of my Council "sentence" was the chance to meet you and your colleagues and get to know you. I now have a much more balanced and informed view of politics than I had when elected and for that I will be forever grateful to you.