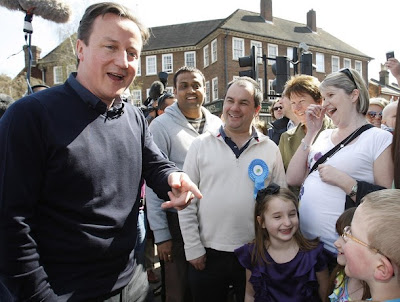 The traffic wasn't the only thing congesting the crossroads in Cheam last Saturday with a massive crowd packing the centre of the village to get a glimpse of David Cameron.

He came the day after his announcement on transferable tax allowances for couples either married or in a civil partnership who pay the basic rate of tax. Philippa Stroud has had an enormous influence on our family policy and so it was fitting that the future Prime Minister followed up his announcement with a boost to Philippa's campaign to join him in getting elected in Sutton & Cheam.

A pack of journalists surrounded him from the moment he arrived. He flew through being on a tightly managed schedule but he did meet 'real' people, not just hand-picked party apparatchiks and supporters. I was with a number of families. David Cameron spent time talking to the younger children. The media were keen to speak to David Cameron; not the future PM, but the owner of David Cameron Hair on the Broadway. The two Daves had chatted about the Scottish roots of their name. Apparently Cameron the hairdresser thought Cameron the politician needed 'funkier hair'.

The atmosphere was positive and uplifting giving us all a feeling that the election campaign had really kicked off well here in Sutton.
Posted by Unknown at Tuesday, April 13, 2010

I live and work in Cheam

I am working as Man With Van in Cheam

I have big van and its clean and i have lot of straps and blanks to protect your stuff.

I am hard working and help with loading and unloading too.

So if you need help with moving please remember my website