Three Strikes and Brown's Out 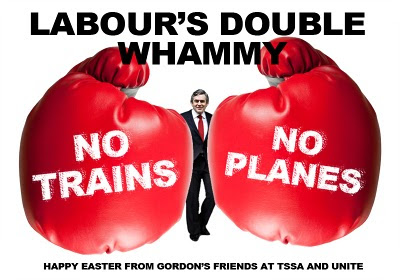 Up until today the 'Spring of Discontent' was limited to a double whammy of strikes by BA staff and the threat of a nationwide rail strike at Easter. Today Civil Servants of the PCS Union joined them with a budget day strike.

Whilst Alistair Darling puts off dealing with the country's deficit until another day, the public sector are getting nervy ahead of inevitable cuts. Whilst the Labour Party are reliant on money from Unite, they are getting a kicking from the same union whilst they string along their members by being in denial about the scale of the problem and refusing to tackle it until way after the election.

Looks like the boxing analogy needs to change to a baseball one; three strikes and you're out.
Posted by Unknown at Wednesday, March 24, 2010