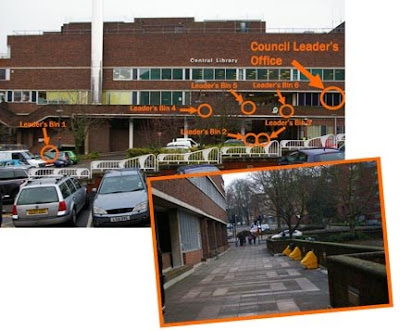 Sutton Council’s Leader, Liberal Democrat councillor Sean Brennan, has no chance of being given the slip coming in and out of his office this winter due to an excellent service of no less than six grit bins less than 50 metres of his council office.

Last week’s Sutton Local Committee, scheduled to meet on Thursday in the Civic Offices, was called off by its Liberal Democrat chairman due to ‘weather conditions’ despite rapidly thawing snow and an elite phalanx of grit bins forming a vanguard for ease of access. Only two days before, 80 doughty residents of Carshalton came to the Baptist Church in Banstead Road to air their views and concerns at the Carshalton and Clockhouse Local Committee.

Discovery of the Leader’s grit reserve will rub salt into the wounds of residents who were left stranded in their homes due to ungritted roads. Residents were shocked to discover that the Council provides a mere one grit bin per 1200 residents.

Following news that Sutton has been reliant on borrowed grit due to diminishing stocks, and with snow predicted for later today, I am sure that Councillor Brennan could surrender some of his private grit reserves to needy areas in the Borough, for example council wards like Wandle Valley and Wallington North which have been left to cope each with one grit bin for an average population of 10,000 residents.

Sutton Council’s Liberal Democrat leader is very fortunate to have a crack squad of no less than six grit bins within a few yards of his office. And that’s not counting the two bins across the way outside the Holiday Inn showing that even his reserves have reserves!

Weather reports do not rule out more snowy and icy conditions, if the Council’s political leadership have not learnt their lesson from short-term cuts to the gritting budget, under provision of grit bins and lorries, Councillor Brennan should dip into his own stock to help residents out.

Whilst we cannot guarantee a platinum service matching the Council Leader’s, an incoming Conservative-run Sutton Council will substantially increase the number of grit bins across the Borough to ensure that residents can at least help themselves in treacherous icy conditions.”
Posted by Unknown at Wednesday, January 20, 2010

Paul - thank you for highlighting this. Please keep the pressure up ! Can I also ask that you monitor the council's pertformance over road repairs - now that the ice is over, the state of the roads will be adding broken axles to the list of broken bones that could have been avoided.

I suspect the riposte by the council will be that these bins are to keep the walkways clear around Civic offices for the general public. Having said that I've done a back of fag packet calulcation, and if we scrapped the life centre we could have 80,000 grit bins in the borough (always a discount for bulk buying)

Brilliant David... but I bet St Helier estate would still be stuck with one and the leader's office would have 80,007!