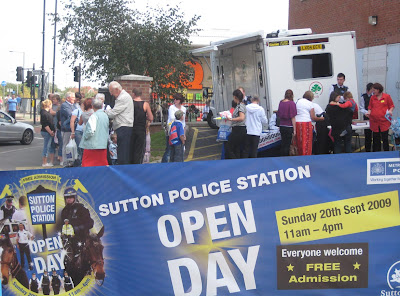 Sutton Police Station's police cells were overflowing last Sunday, not with criminals, but with curious residents who came along to the open day organised by new Borough Commander, Guy Ferguson. An estimated 1800 visitors had a rare opportunity to see the custody suite and the CCTV system as well as exhibitions which held the interest of all ages.

Police dogs, horses and vintage cars were on display. An 'angry man' - in reality a policeman prepared to brave the unseasonal warm weather in the biggest padded suit I've ever seen - was the subject of a demonstration in subduing offenders. Children queued up to batter him with soft truncheons. Hendon training, this was not. Meanwhile, the Parks team, the Licensing team and others were around to talk about all issues, building relationships and passing on serious messages about crime awareness and prevention. From meaning to just pop in for a short time, I was enthralled for a couple of hours in seeing everything that was on display and meeting police officers who had all given up their Sunday on a voluntary basis to make the day a real success.
Posted by Unknown at Friday, September 25, 2009

I am a Police Officer too in our country but this police personnel have a big dissimilarity with us.

Good luck at the craft show!Happy Christmas and happy new year..Sounds like you had a nice weekend. We had a really good weekend here, too. :)