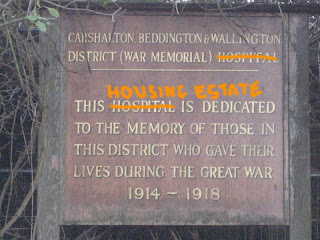 Sutton & Merton NHS Primary Care Trust have delivered a blow to residents living around Carshalton Park by scrapping plans to build a new Intermediary Care Hospital on the War Memorial site, instead seeking to flog the land off for £2.1m.

For years, residents and ward councillors were promised faithfully that the land would be used for healthcare and their fears that it would be redeveloped were unfounded. Unfortunately those promises were hollow.

I have promised to keep residents up to date. Unfortunately, I found out about the sale, not from the PCT but from a Beddington councillor who had been informed at another meeting. I had smelt a rat when I saw the site strangely absent from the latest proposals for changes to healthcare in Sutton and Merton, Better Healthcare Closer To Home.

The proposals as a whole will largely benefit residents in the ward with the new Shotfield clinic in Wallington and rebuilding of part of St Helier hospital but Sutton will largely lose out to residents in Merton after their local MP spent well over £70,000 of taxpayers' money on postage campaigning for her constituency. The Labour Government have rewarded her with the majority of the new facilities being in the north of the area covered by the Trust in places that I have only just recently heard of through my role as councillor, despite living here for all of my adult life.

As we come close to the 90th anniversary of the end of the First World War, it is disappointing to think that a healthcare site built through public subscription might be replaced by a memorial to the fallen by identikit modern housing. I'll keep you posted as I hear more.
Posted by Unknown at Wednesday, October 29, 2008