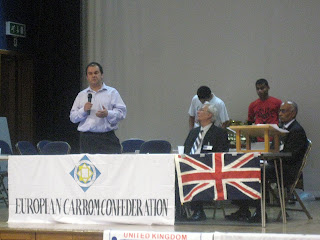 Now my computer is just about back to normal, I ought to catch up with the events of the last week or so.

I was invited to the attend the final and closing ceremony of the Carroms European Championships held at Sutton High School. If you haven't heard of the game before, have a look at the Wikipedia entry and this simple summary of the rules. Essentially it is similar to pool but played on a board with counters which are potted by flicking a 'striker' instead of hitting a cue ball.

The great thing about the game is that it is easy to get into, costs very little to start and can be played by young and old, male or female, fit and unfit. My grandfather made my father a board over half a century ago, which my family still pull out and play on every now and again. Being accessible is only one test of a great game. Longevity is the other. The final was three hours of enthralling play. The skill and concentration shown by the two finalists, both from the UK was remarkable and the time flew by.

Vijay Sharma of the UK Carrom Federation was a terrific host with contestants from Italy, Holland, France, Germany and Poland amongst others. It occurs to me that with a bit of a helping hand from the Council, Vijay and his colleagues could organise some demonstrations of this compelling game in Sutton schools and encourage a few young people to take up the game. Young people often talk about not having anything to do. We respond with youth provision without truly understanding whether youths are interested in what is provided or not. Offering a choice can only be a good thing and carrom is easy, cheap and different. Well worth a crack in my book.

I used to play a football version of this when I was very small but it perished into obscurity when I got Subbuteo for Christmas!

Perhaps we could have a virtual version in the new Life Skills Centre?

This does sound interesting, but I'm going to stick with football for now.

This has got me thinking though. Would the Conservatives or Lib Dems ever field football teams in a one-off charity game? Or maybe there is another sport more appropriate?

The LibDems are not reknowned for supporting competitive sport, or any other kind for that matter (I'm not sure I understand what non competitive sport is to be honest). However I would happily take part in an inter-group rugby match for charity. Something tells me they would not be quite as 'brave' without a desk to hide behind.

On a slightly more serious note. One very worrying detail that I raised soon after being elected was how poorly Sutton does in the league tables of adults taking physical activity. On most health indicators the Borough scores well (e.g.smoking etc)as one would expect given the Borough's socio-economic profile, however take a look at: http://www.sportengland.org/index/get_resources/research/active_people.htm - it is quite shocking.

When I raised this with Cllr Tope who, among many other roles, is lead Councillor for Leisure he did not seem at least interested and pointed out that the libraries were good in the Borough(these also fall under this remit)!!

My wife has just returned from swimming in the Westcroft Centre. She was quite disgusted, apparently the pool is filthy and the attendants are doing nothing to stop youths (and some adults) hindering those trying to swim in the designated lanes. Recently when she commented on the state of the pool she was advised to go to Morden "where it is much better".

There is much that is good about this Borough, but when it is not there is all too often a real mephitic complacency.

(BTW Scully the Union Flag in the photograph is upside down - the international signal for distress - you might recall the Annual Council Meeting after the May 2006 elections when a Union Flag was hanging upside down over the ruling LibDem Group. How prophetic 27 months on!!)

Well spotted. I was wondering why he was turning it upside down as I got up to speak.