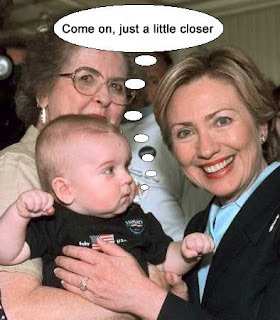 I'm straying just a touch away from Sutton politics in this post as Hillary Clinton finally gives up the ghost in seeking the Democratic Nomination. She has suspended her campaign rather than ended it. This will have something to do with the millions of dollars that her campaign is in debt despite having ploughed a lot of her own money in.

The unedifying spectacle of Clinton and Obama slugging it out has left McCain to go about his business campaigning in the important states. Can you believe this is only the end of round one? The election isn't even for another five months or so yet it seems to have gone on longer than one of Cllr Roberts' speeches.
Posted by Unknown at Saturday, June 07, 2008

In the vein of "The sourest grapes make the finest wine", there is quite a rumble of Hillary supporters throwing their approval behind McCain. There has even been talk of a McCain/Clinton ticket which, although unusual, has a precedent with Lincoln/Johnson in 1864. If you study the US history books, never stand as president if your VP's name is Johnson (Lincoln/JFK)!

Longer than Cllr Roberts' speeches? Come on, the primaries are only a few months!

Hey! As the only commenter on this blog, do I get a prize?

Talking to yourself, eh David:) This was a post that I was motivated to write because of the picture. Has Colin Hall had his picture taken with any pugilistic youngsters recently?

Monica Lewinsky is rumaging through her closet one day and finds a dinner dress she has not worn since
she was an intern. She takes it to the dry-cleaner
and asks the old owner if he could also remove
a stain she points to.

The old guy is a little hard of hearing and says:
''Come again.''