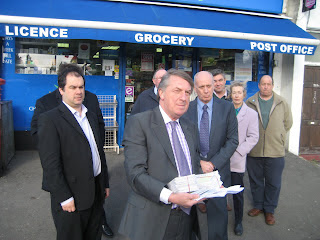 The Post Office have revealed their decision on the future of branches in London. All five that were earmarked for closure in the Borough are to be axed, leaving hundreds of people inconvenienced and having to suffer longer journeys and longer queues.
One is here in Carshalton, opposite the BP garage on Carshalton Road. BP are putting an M&S Simply Food branch on their site. Without postal services, I fear that the shop will find it hard to compete with the might of M&S and BP. Another nail in the coffin of diversity.
Ken Andrew, Conservative Parliamentary Candidate for Carshalton & Wallington did a terrific job in raising awareness of the threat and collected a petition with well over 3000 signatures on it. Despite best efforts, the decision had pretty well been made with only 7 branches reprieved in London out of 171.
Posted by Unknown at Wednesday, May 07, 2008

Paul - I say again. It's no good you and your colleagues standing around with Ken Andrew trying to look glum and serious about post office closures when you all know full well the reason for it. Time and again, I and UKIP have pointed out the honest truth behind it all, and yet you try to gain political advtantage (along with the Lib-Dems), by hoodwinking the general public who have all along been denied the truth. The EU are to blame, you know it, Ken Andrew knows it, and all those standing with you know it, so why can't you be honest about it and tell the public the truth?

I am being honest about it. However it just doesn't coincide with your abridged version of the truth.

We know that the EU passed a directive restricting subsidies. The Government has still managed to agree a massive £4bn package of financial support, keeping this within state aid rules. The main reason for the considerable deficit being run by the Post Office is its pension fund which has a £5bn deficit itself.

The Government has switched a lot of its own business away from Post Offices affecting the counters business and open competition has eroded the delivery business. The Post Office admitted in their own report that competitors are up to 40 times more efficient that the Post Office themselves. As has so often happened with nationalised industries, a once profitable organisation has made some bad decisions, suffered from some further bad decisions by the Government and is trying to find a way out from within the monolithic centre of a vast organisation.

Paul - what you say makes sense, and whilst I agree with the majority of it, there is also the way the EU forced "competition" on the Royal Mail, which aligned with the cut in subsidies has led to the situation we are in now.

I suggest you and your colleagues contact UKIP headquarters if you want to know more.

All I would say is that 7 out of the 171 WERE saved so obviously some of the campaigns run around London were successful in keeping their local Post Office branches open. Doesn't that suggest that local politicians are right to do what they can then? It may not be a high % success rate, but it happened nonetheless.

Also, and I am sure you won't mind if i take a little more party political swipe ! :-) - UKIP regularly camapaign in local elections on issues that can only be decided at Westminster. Indeed, certain GLA candidates did the sdame recently!!!! The words kettle, black and pot spring to mind...

Love and kisses are all very well David, but in the real world they won't stop post office closures, as well you know. The government, the tories and the lib-dems are all basically liars when it comes to informing the general public.

You know the truth, but are you afraid to say it?