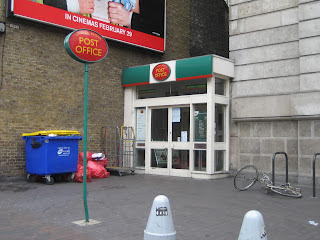 I walked past this Post Office in London Bridge on Saturday. It was closed as it was early morning and so no-one was around. This is in stark contrast to a few days ago when, as reported in Private Eye, LibDems queued up to have their photo taken with Mayoral hopeful Brian Paddick to save post offices.

Kingston MP Ed Davey, Hornsey & Wood Green MP Lynne Featherstone and a councillor made the pilgrimage to London Bridge to be snapped with Paddick.

Two minor points stick out. With four post offices closing in Featherstone's patch and five in Davey's backyard, could they not go along to one of those. Secondly, with 169 post offices in London for the axe could they have not at least found a post office that is at least threatened. The London Bridge post office is not on the list. The sub postmaster must have been confused.

We have all been campaigning to keep our local post offices open but this is another example of a posturing empty gesture from the LibDems that is all about electioneering and nothing to do with the future of our communities. I hope they at least bought some stamps while they were there.
Posted by Unknown at Monday, March 10, 2008

Speaking of an empty gesture and blatant electioneering what will the voters make of Scully's above comment which he made in regards to the closure of Post Offices right here on his very own blog. If he is so anti-subsidy then why is he campaigning to keep the Post Offices open? It does rather sound as though Scully admires the EU for their interference in instigating the closure of British Post Offices.

Perhaps Scully is a closet Eurocrat? Maybe he too would like to board the Brussels gravy train in the next few years!

If I am not very much mistaken there is another election of importance taking place in a few days time. I understand that the venue will be 48 Benhill Avenue and that there will be 'Eleanor a la carte' on the menu...

"From the shadows steps the assassin, the blade gleams in the murky gloom of the Benhill HQ, a sadistic grin spreads wide across his dwarfish features, his eyes blinking ever quicker at the thought of his insatiable thirst for power being being satisfied momentarily, Scully's dagger has not been left long enough for the dust to gather on its scabbard, soon the blade will no doubt be dipped in the blood of the same loyal colleague as before, a paper crosshairs is being placed between Eleanor's shoulder blades yet again...will the pint-sized assassin finish his victim off on Wednesday?"

It is certainly interesting for me to read that article. Thanks for it. I like such topics and anything that is connected to this matter. I definitely want to read more on that blog soon.