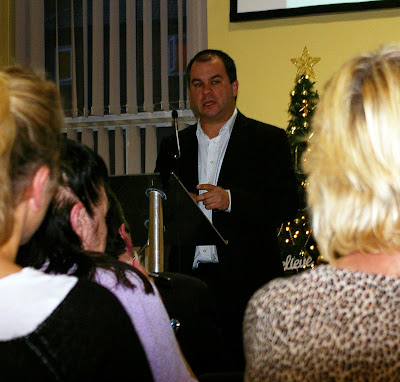 Last Wednesday, I hosted a conference for the voluntary sector alongside Philippa Stroud, parliamentary candidate for Sutton & Cheam and Director of the Centre for Social Justice. Our aim was to share the knowledge and experience of friends and colleagues of ours and to listen to the concerns and views of those people who give their time so freely to help those in our society with greatest need. A wide range of organisations were represented from Citizens' Advice Bureau through to the Cassandra Learning Centre, a family-run organisation which tackles domestic violence, established after the tragic death of the daughter of the founder.

The first session was about working with the media. Many organisations hide their light under a bushel, often because they are spending the vast amount of their time working providing services and support that promotion and awareness is the first to go. However, with funding ever harder to find, a degree of promotion is important to compete against the larger better organised operations. Attracting new volunteers is only possible if people know that you are there. As well as talking through the basics of press releases and media management, we discussed other possibilities such as groups sharing someone that can do the odd press release from home that may not be able or willing to get involved in any other way. Similarly I would encourage asking for help from bigger partners such as the Sutton Centre for the Voluntary Sector (SCVS) and the Council itself.

Following on from this, Jo Hillier, head of Social Action for the Conservative Party and formerly Saatchi's, talked about raising profiles and brand management. Drawing on examples of big companies such as British Airways and Marks and Spencers, Jo told us how to spend a few moments reconsidering what our brands are. The message was clear, you do not have to be a multinational to do this. A short time on this will help work out where your support may lie for funding and volunteering, how to improve applying for tenders from the Council and other bodies and how to attract service users to your organisation if applicable.

Finally Debbie Pippard and Shaun Walsh from the Big Lottery Fund came to talk about fundraising. It's not often that a big agency like this comes into town and says that they have funds and they want to give more cash to Sutton. They already fund organisations in Sutton including SCVS but their new "Awards for All" fund is open for direct bids and they encouraged the groups present to come forward with their bids.

Philippa Stroud brought her considerable experience to bear when she spoke about the challenges that the sector face including "mission creep" as the government and commissioning organisations like the Council and PCT move smaller partners towards the direction that they want and away from the core approach that the voluntary group was set up for. I hopefully got across the point that councillors from both parties in Sutton value the work that the voluntary sector do and that the Conservatives want to build on the strong partnership that exists, sharing more skills, resources and experiences to learn from each other.

The delegates had the floor for the second half of the afternoon. Breaking up into 4 groups they discussed their concerns and then shared them with me, Philippa and Baroness Warsi, Shadow Minister for Community Cohesion and Social Action.I asked them three questions looking over the next few years and the feedback had a high degree of consistency across the four groups that they were split into:

1. What are your main challenges at the moment?

2. Where do you see your organisation and the voluntary sector in 5 years?

3. What can the Council and Government do to help?

The last point reflected the massively positive feedback that we had from the event. I was a little surprised to hear that this was the first time that many had had the benefit of such an event. The Council have good intentions towards the voluntary sector and clear channels to engage with their partners in this area but it is often too easy to rely solely on partnership boards and panels rather than chatting informally or engaging in a different way to get a true reflection of concerns. I was delighted to be able to offer something that people found genuinely interesting and useful and to meet such a dedicated bunch of people. Like them, I look forward to the next one.

When I have a chance to catch up, the paperwork and summaries from each of the presentations will be made available to all. I'll post them here as well.
Posted by Unknown at Tuesday, December 08, 2009

i have been told that the Media presentation was excellent Paul.

Of course it was Jason

All this waffle is all well and good, but how does it put the Conservatives in the light of crime tackling? People don't want to hear all this, they want action, and the Tories just can't provide it. So what is Philippa Stroud's take on tackling the massive spread on crime in Sutton? Reality is, whe hasn't got one. Sad really.

Err, this wasn't anything to do with crime. Granted there was a representative of a charity tackling domestic violence but there were also people who transport disabled people and the citizens' advice bureau who help people on dealing with government bureaucracy and legal matter. I'm not sure that it would have been terribly relevant to having a debate on the reintroduction of the death penalty.

I'm sure that the many organisations that Sutton outsources its contracts to will be interested to note that you dismiss talking to them as 'waffle'. Once you take a careful, sober look at the £450m turnover organisation that is Sutton Council, you'll realise that setting up a gibbet outside Wilkinsons won't solve everything.

I'll put a little tag under the article next time I'm talking about crime if it will help.

Volunteering has always been a staple part of British civic life. Although large charities are becoming increasingly professional and more and more prone to tickboxing, jargon and targets, the great British tradition of volunteering remains in rude health.

In Sutton small and even micro organisations on the ground are still beavering away on tiny budgets to provide voluntary services on a variety of different fronts, more often than not for vulnerable and less well off people. At this time year, a time of giving, this is all the more important.

And all is done with no help from the Council at all. They don't listen and seem unwillingly to learn more about us and to trust us, with the exception of a few meaningless gestures every now and then.

It shows a ignorance to dismiss these efforts as "waffle". Sutton would be drastically poorer without them, particularly the most vulnerable in our area. I invite the maker of this comment to open his eyes and to see the wonderful contribution that is made to Sutton often far from the limelight.