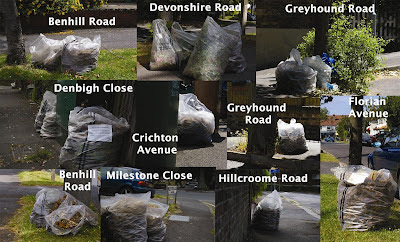 The row surrounding the unpopular £35 green garden waste charge rumbles on with the next stage predicted by the Conservatives back when the charge was first approved. Almost one case of flytipping a day has been reported to the Council as a result of this charge.

Cllr Tony Shields spent forty minutes on a whistlestop tour of the Borough and spotted a further ten cases where the old plastic bags had been left on verges and along streets. This is despite the new scheme having been in place for a month. Tony told the Sutton Guardian

"You don’t have to be Sir Alan Sugar to work out this scheme just isn’t working. Since the plan was introduced, there’s been 20 reported instances of garden waste being fly-tipped. Just driving round Sutton for 40 minutes showed me that there are plenty more bags being dumped.

"It demonstrates the hacked-off public’s refusal to pay £35 per bag and an unwillingness to queue outside the Kimpton dump in the sweltering heat for nearly an hour – neither of which I would call fun. This is a total Lib Dem cock-up and the taxpayer is funding the cost of fly-tip collection."

"There’s obviously going to be a large cost involved if the council diligently picks up all the flytipped waste. Who knows whether or not they have the necessary fleet get it all done. The carbon footprint impact will be huge, not to mention the time it takes to pick it all up.”

He said Liberal Democrat councillors only had themselves to blame. “We warned them from the outset that this would happen. In the warm weather, not only is fly tipping an environmental hazard, it’s also unsightly.”

LibDem spokesman Colin Hall has dismissed the charge saying that Sutton has one of the lowest rates of flytipping and that garden waste made up 5% of all flytipped waste in June. A back of an envelope calculation would suggest that according to his figures there were 100 incidents in a single month of illegally dumped waste. If this is right, it can't be dismissed that easily. What is he doing to address this costly and unsightly problem?

I am glad that he has finally relented and decided to consult residents six months after introducing the policy. Not so much Consult, Consider, Ignore but Ignore, Consider, Consult. Residents that are against the charge need to make their voices heard clearly in this period.
Posted by Unknown at Friday, July 04, 2008