Brussels out of step with its tenants 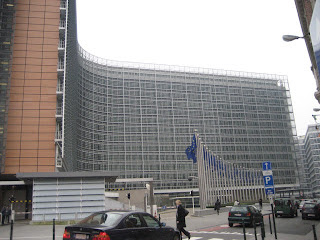 I went to Brussels last weekend with my friend Andy, staying in a hotel just yards (not metres, obviously!) from this building, the Barlaymont, home to the European Commission until it was found to be riddled with asbestos.

Anyway, Andy has an electric wheelchair which is far too heavy to lift. The hotel had a step up to the entrance and could not supply a ramp. Neither Andy or I are precious about access rights (it's all swings and roundabouts since the only wheelchair spaces in Eurotunnel are in first class) but the irony was not lost that despite the fact that we were in the shadow of the building that pumps out oppresive regulation for the whole of Europe, the Belgians ignored them.

We borrowed a couple of planks of wood to make an extra step. The following day the Eurotunnel was cancelled for 24 hours and so they had to put us up in a Hotel Ibis. This was not as salubrious as the first hotel but was easy to access, the rooms were big with an accessible bathroom. So, they'll get any future business. You can regulate to your heart's content. It only builds up resentment and the free market will win through in the end.
Posted by Unknown at Thursday, March 22, 2007