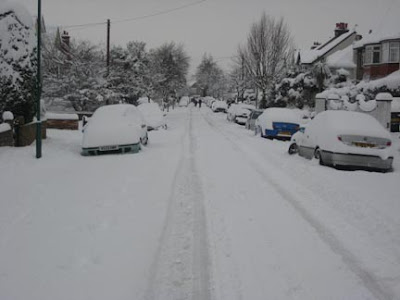 Angry residents have been hitting the phones this week with complaints to the Council reaching levels last seen when a £35 per bag charge was slapped on green garden waste collections. When the first snow arrived this week, the main roads were navigable as the gritting teams had enough warning to cover the ground. Side roads were a mixed bag.

Tuesday saw rain which had cleared much of the snow, suddenly freeze after a rapid drop in temperature. This caused chaos across the Borough with the main east-west A232 at a total standstill. People reported 2 hour journeys to get from Cheam to Carshalton. Side roads were treacherous.

Now, no gritting effort is going to remove every flake of snow and trace of ice from the highways but people have got every right to be angry when the short-sighted LibDem administration slashed the winter road maintenance budget by £20,000 AFTER last February's snowfall which had a bigger effect than Copenhagen on people's driving habits, as shown in the photo. This cut was made as £16,000 of taxpayers' cash was spent on upgrading the air conditioning in the Council leader's office.

A mere ten months later, snow returns, everywhere grinds to a halt. The gritting team have been working hard throughout. Theirs is a thankless task, working around the clock to cope and keep us moving but there is more that we can do. There are plenty of residents who would be prepared to help grit their pavements. How many grit bins would £20,000 have paid for. Whether emergency bins are put out when the warnings come or permanent ones are opened ahead of the snowfall, I don't know. However if we are to trust people more rather than run everything from the warm and climate-controlled Council office, then we should help people to help themselves as well. Alternatively the LibDems could watch the roads freeze whilst they freeze the Council Tax just ahead of a difficult election campaign. Oh wait...!
Posted by Unknown at Wednesday, December 23, 2009

While I haven't seen the council explicitly encourage people to grit their own streets, they have just published the locations of the grit bins and the home page says, "If your local grit bin needs restocking please let us know by emailing waste.management@sutton.gov.uk. or call us on 020 8770 5070".

I'm working on trying to get the grit bin locations plotted onto a map for easier reading.

Thanks for this. Quick bit of adding up shows 4 bins in Beddington North, 8 in Beddington South, 2 in Wallington South, 1 in Wallington North, 3 in St Helier, 1 in Wandle Valley, 6 in Carshalton Central, 33 in Carshalton South & Clockhouse, 14 in Sutton North, 18 in Sutton Central, 12 in Sutton South,5 in Stonecot, 5 in Sutton West, 9 in Cheam, 18 in Belmont, 4 in Worcester Park and 2 in Nonsuch. Being only a quick look I may have got some wrong and there were 4 which I couldn't place. Nonetheless it shows an interesting spread. There are definitely some patches that could do with better coverage.

The list doesn't look like it has been reviewed for a while. Tescos in Sutton has been gone for 5 years or so now.

You're quite right that visualising these data properly, on a map in this case, means that people can easily spot apparent gaps in coverage.

As you have also noticed, the first rule of data is that all data contains errors. That's why it's important for government to make raw data available to the public so they can report/correct errors, saving everyone time and money.

The council will be sending me the geo data for these points and I'll rustle up a map as soon as I get it.

With the ward boundary data set it'd be easy to calculate how many grit bins are in each ward, though you'd need to know about the road road lengths and traffic flows within each ward to genuinely say whether an area is getting their fair share.

Google Street View is very handy for checking whether the data match the reality on the ground. As cartographers love to say, the map is not the territory.

It was nice to know that my street was not important enough for gritting... yet three gritting lorries at least used it as a short cut during the bad weather!

The dozens of people around the Grosvenor Avenue/Salisbury Road/Blakehall Road areas with bruised hips and sore backsides might want to know where the nearest grit stores are for future reference - hopefully Adrian's work will bear fruit.

Version 1 of the grit bins map is up and running. Some of this data is quite imprecise or even wrongly placed on the map but the textual descriptions should be accurate and enable you to find your way to the nearest grit bin. In short, most of the map pins are located on the right streets but not necessarily at the right point/junction on that street.

David, Your nearest grit bin seems to be at the junction of Park Hill and Beynon Road. Close the Street View pane using the X in the top-right corner of the photo image if you want to be able to click on the blue map pins and pop up their descriptions.

Sutton Council have just sent me what is hopefully better quality location data so this map will improve as I get that integrated.

Please leave a comment here or send feedback to adrian.short@gmail.com. I'd like to hear about bins that are missing, locked or vandalised, or just tell me how full your local bin is. It would greatly help if you use the reference numbers in the info bubbles that pop up when you click on the blue map pins.

I'm surprised at the number of major cut-throughs with steep hills that have no bins and which weren't gritted - Grosvenor Avenue for example. Alas, there's no money (or willing) to rectify that.

A great pity, and bad timing the council decided to cut the gritting budget, but in all fairness most of the roads around parts of Belmont were gritted last Thursday evening, although chaos was in evidence after that.

Version 2 of the Sutton grit bins map is up at the same address as before.

This version has hugely improved accuracy. Most of the bins have been visually confirmed using Google satellite view or Street View. For most bins you can switch to Street View and see them for yourself.

Duplicates have been left in for the moment but in most cases it's easy to see them by the clustered points on the map.

Here's a new version of the Sutton grit bins map with added Google Street View. This should make it even easier to locate the bins, although not all the bins are visible in Street View.

Sorry Anonymous (I wish people like you would reveal your true identities) - I'm no apologist for the Lib-Dems despite Paul's assertions and nonsensical waffle from "Belle Mont" and "Dominic".

Gritting HAS been done in certain parts, and definitely main roads. It's just the timing that has been wrong and a lot of that has been down to the Met Office. No amount of grit/salt will combat ice and dangerous conditions when temperatures get this low. Perhaps you should watch the weather forecast more. Personally I think this is the start of a cheap Tory shot come the election. Just like the Lib-Dems, blame everyone but themselves.

Gritting is not effective when the temperature reaches -15%C.

I'm not sure how the Conservatives could be blamed for any decision taken in a Borough that they haven't run for 23 years but I'm sure that you'll let us know different.

VOTE CONSERVATIVE AND NOT ONE SQUARE INCH OF THE BOROUGH WILL BE AFFECTED BY ICE OR SNOW FROM MAY 2010 ONWARDS.

YOU CAN TAKE THAT AS A "CAST-IRON GUARANTEE" JUST AS OUR PLEDGE ON A EU REFERENDUM.