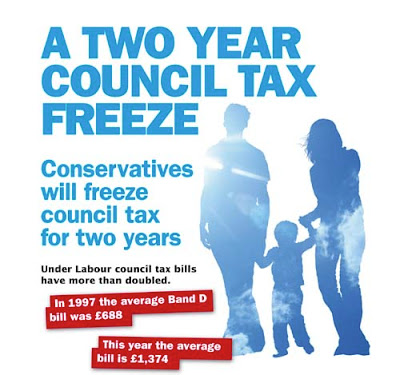 You will have received your Council Tax bill by now, showing another inflation-busting increase. Well, we tried. The only part of our bill set by a Conservative, that of the GLA precept, was frozen by Boris. George Osborne, Shadow Chancellor has pledged to give council's enough money to freeze council tax if they can peg their increases to less than 2.5%. This is a fair partnership between national and local government; you do your bit and we'll help. Meanwhile, we sought your views and shared them with the ruling administration.

We believe that Sutton could have joined the thirteen other London Boroughs that are freezing or cutting their tax, helping their residents when they need it most. You can see more on why we believe this is possible and how we could have acheived it without any frontline cuts at the website http://www.freezethetax.org.uk/.

Instead, the biggest drain on this coming year's budget, the £8million Sutton Life Centre is coming up for the go-ahead at tomorrow's meeting of the Council's Executive. £4million is coming from a grant from national taxpayers, the other £4million is coming from us directly, here in Sutton. The Council have raided the reserves, taken money originally given to Adult Social Services, delayed repairs to schools and kept unexpected windfalls that you were owed, just to shore up this pet project. I've already written about the way that planning was obtained in a hurry. The Executive have had only six days to see the business plan. However, since it only contains six pages of financial information for an operation that is aiming to turnover £3/4million a year, they could come to a conclusion quite quickly.

The clincher is the target market. It is aimed at schoolchildren in years 6 and 8 that are within a 60 minute drive of the site. According to the figures contained within the user profiles in the report, it is safe to say that the Sutton Life Centre needs to attract 60% of the entire population of children in years 6 and 8 living in South London and North Surrey. Not even Bill Gates would attempt market penetration of that kind within a 12 month period. They are helped by the fact that they will stop the existing Junior Citizenship programme thus forcing local schoolchildren to go to the new building or miss out. The fact that the existing scheme costs schools £3 per pupil and the new one £9 per pupil suggests that schools are going to be out of pocket again because of the Local Authority.

The charge of £9 is another optimistic assumption. According to the report, there is one place in the country vaguely comparable situated in Milton Keynes. Sutton's business plan requires twice the number of visitors paying a higher price simply to break even. I suspect that tomorrow night, the LibDems will be leaving their legacy to the people of Sutton. The likely £95k per year needed to keep the place open with just a 20% shortfall in income will provide 95,000 reasons why not to vote LibDem at the next local elections.
Posted by Unknown at Sunday, April 05, 2009

Go on! Start a Facebook group to higligh the issue. You know you want to!!

You're so right, I did want to. Have a look
here.

........Paul. Whilst it might be quite laudable to press for a freeze, shouldn't the Tories have pressed for a cut? It's no good pussyfooting around here. The Lib-Dems waste OUR money. Get your act together and demand they STOP.