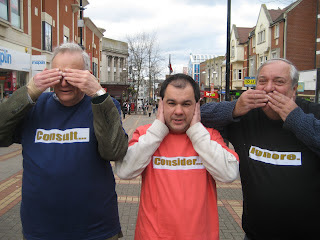 The LibDem Council have just completed their six-week consultation on this year’s budget. This meaningless exercise managed just 22 responses from the 180,000 residents of the Borough.

In order to show that people were interested in what tax they paid, I was joined by four colleagues on Sutton High Street and obtained 26 responses in a mere ten minutes.

This equates to one ten-thousandth of the population and our level of Council tax hinges on this. The Council needs to consult properly or give up the pretence. If the LibDem Councillors had just taken one form each home to get a neighbour to complete it, they would have got a better response.

I addressed the Council Executive (the inner LibDem Cabinet) on Monday, insisting that they stop demeaning the idea of consultation by either doing it properly or not at all. The questions were in the mould of American-style "push polling" which is not interested in your answers but passing on political messages within the question. Take this one for example: "Do you agree that any increase in council tax should be kept below the Government's national limit of 5% even though the grant the council is receiving from the government does not cover inflation?" I was surprised that 8% of respondents answered no to this. Firstly because, I find it amazing that anyone would want to see a rise of more than 5% and secondly because this equates to 1.76 people which makes me question who the 0.76 of a person was.

We go through this dance each year, with the LibDem Council buttering us up for another above-inflation increase. The budget that has just been consulted on, shows a Council Tax increase of 4.6%. If the increase comes in any lower than this, whilst extremely welcome, it will mean that the consultation was carried out on a totally different budget. Not that the vacuous questioning contained in the questionnaire would have to be changed, just the background papers.
Posted by Unknown at Thursday, February 07, 2008

what would you recommend to do better for asking people in sutton about the budget and councils tax, councillor scully?

Twenty-two responses? Is that the very best that the combined might of the Liberal Democrat Council can possibly muster?

And I suppose they'll propose to whack up the council tax again this year.

Perhaps, Councillor Scully, the Lib Dems don't want a large response because it won't be flattering.

I ceased by shocked by this bunch a long time ago. Do us all a favour and turf them out please!

Sutton council's "consultations" always were a farce. Hilarious thing is the three in the photo would do exactly the same if they ever got to power - which they won't.

Interesting theory except taking each of your points in turn:-

3. That's why we doubled the consultation in 10 minutes.

another increase will still mean we have got to pay lots and lots of money to the council when we already pay lots anyway.and they are going to close our cheam baths and especiallly when they only got 22 people to respond to their budget consulting!