Consigned to a Bleak Future 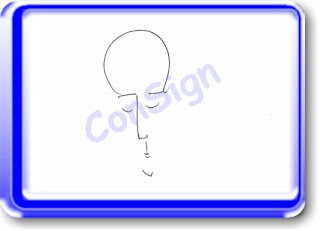 Quentin Davies MP has defected from the Conservatives to Labour the day before the Clunking Fist takes power. The picture is a self portrait drawn for Carshalton and Wallington Conservatives as part of a fundraising exercise called Consign, which is ironic since he has just consigned himself to a footnote in parliamentary history.

My only memory of the Europhile MP is when he was Shadow Northern Ireland Secretary and was speaking at the Conservative Party Conference on the last morning. This is somewhat of a graveyard slot as people are creeping into the hall to reserve their seat for the leader's speech, nursing the mother of all hangovers after four days of excessive "networking". Unfortunately a younger member of the party bent over and let out some 'Wallace and Gromit' in a row just behind the Shadow Cabinet as a wag added "If only more of our frontbenchers could elicit such raw emotion."

Since he has accused David Cameron of "superficiality, unreliability and an apparent lack of any clear convictions" it's maybe worthwhile looking at Quentin Davies' own reliable opinion:-

QUENTIN DAVIES ON GORDON BROWN
26 JUNE 2007
"a leader I have always greatly admired, who I believe is entirely straightforward, and who has a towering record, and a clear vision for the future of our country which I fully share."

16 MARCH 2005
"the Chancellor has been losing control... His projections... have been consistently wrong. He has been wrong about both revenues and expenditure... The Chancellor took risks... he is imprudent... a great worry... very worrying... he simply wanted to win the next election... if he can... it does not matter what happens afterwards... the Chancellor went in for an orgy of self-congratulation... deceiving other people... complacency... he is not prudent and responsible, and not a person to be entrusted with the management of anybody's finances, let alone the country's finances... unattractive and frankly problematic... an absolutely devastating misjudgement and mistake... the destruction of our pensions system... We have not had a word of apology from the Chancellor... He was just incredibly imprudent... extraordinarily incompetent... extraordinarily naïve... desperately complacent... As a result of that self-congratulation and complacency, the Chancellor is becoming so cut off that he is beginning to underestimate the intelligence of the electorate... I trust and believe that something nasty will happen to the Chancellor in electoral terms before too long. He will have no one but himself to blame.
Quentin Davies MP, HC Debs, 16 Mar 2005: Column 309-318

OK, it's a bitter article but really, an MP with more outside interests than you could shake a stick at, best known for being fined for cruelty to sheep, complaining at the end of his career from the luxury of a safe Conservative Parliamentary seat is somewhat disappointing not only for Conservatives like my group colleagues and I that are simply trying to make Sutton a better place but for the 22,109 constituents that voted for Conservative values and policies only to see their vote wasted as he spurns them for the 14,664 constituents that voted for his opponent.
Posted by Unknown at Tuesday, June 26, 2007

I look forward to seeing the same monotonous tone if someone defects to the Tory party (which I doubt).

It's not rats deserting a sinking ship that Cllr Scully should be concerned about. It's the number of people that have defected over the past year, whether councillors, MP's or Lords that should be gnawing away at him and his fellow councillors. The fact is that Cameron is all wind and bluff - candy floss - with no policies issued yet. Making them up on the hoof won't get the Tories a win however hard they try to spin it. Just watch the results here in Sutton when the general election comes.

The sinking ship view doesn't really stand up to scrutiny. Conservatives have broken through their flatlining 33% in the polls that they stayed at for a number of years and have regularly topped each survey. In this time, the LibDems have sunk to 12%. The poll of polls predicts the LibDems being reduced to just 14 seats.

The policy development process has been clear from the start. Conservatives have a number of policy commissions due to report at the end of the summer. The Shadow Cabinet will then form their manifesto pledges from an informed position.

Similarly, defections have been going on between all parties over the last few years. A LibDem councillor has resigned the whip locally, a UKIP councillor in Devon has recently joined the Conservatives. It happens.

You'll notice that I reported our local UKIP defection differently to that of Quentin Davies. Locally it was on clear differences in policy and approach which I have absolutely no problem with. Quentin Davies was played like a violin by Gordon Brown and has immediately been ostracised by both sets of backbenchers.

I think that there is always a credibility issue for defectors.

The electorate, if interested, should ask themselves whether they could justifiably endorse someone who seeks election on one platform, only to defy the wishes of that electorate to join a different political party.

I know this has happened locally and personally I don't approve but it is a matter of individual conscience.

I think in Davies case and that of other defectors they should sit as independents and then actually give the voters a real choice either at the next election of a by-election.

Either way apart from 15 mins of fame what do defectors achieve? Not much apart from endless self-grandiose pontifications of 'principle', not much. Besides it takes quite the 'individual' to fight those whom have worked not only for him or her for such a long period of time in my view.