Messing about on the River 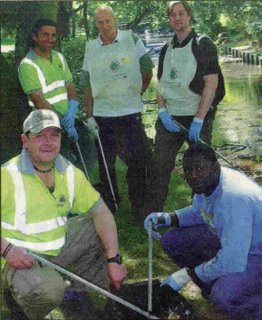 Well in it, actually. As I sit in my relatively comfortable office, it is difficult not to have a pang of guilt when thinking of my fellow ward councillor, Eric Howell (centre, standing) getting his hands dirty whilst cleaning up the River Wandle that runs through our ward. This was one of the events in Sutton's "Take Part, Take Pride" series. We've spent the last few months telling everyone how we wanted to look after the place and so it is good to spend a couple of hours (oh yes, not just a photocall,) keeping it clean.

LibDems in Sutton, as they do across the country, speak as though they have cornered the market in green issues. Although some wrote of David Cameron's "Vote Blue, Go Green" message as touchy-feely spin, the facts do bear out this message. Sutton is feted as a good Council for recycling. They are 36th in the country. Out of the 35 that recycle more than Sutton, 23 are Conservative controlled.

To my mind, one of the most fundamental differences between the Conservatives and the other two parties is that where Labour and LibDem legislate for a world that they would like to see, Conservatives deal with the world as it is, bringing real-world solutions to real-world problems rather than hoping that everyone will fall into their way of thinking and making assumptions in the meantime that rely on everyone falling into line. Tax is an obvious example but we are talking here about the environment so I shall keep off that other thorny subject.

Most of us have an understanding of the need to protect our environment, recycle more and pollute less. Sutton Council have adopted every prototype and pet project that has passed their desk. They ordered several gas-powered refuse trucks at £400k eack. They sat idle as they didn't work. They started a Car share pool called "Urbigo". This ended up as Urbi-won't go as only 14 people or so signed up to the scheme within the first few years. The list is endless. The Council Tax payer is entitled to worry about where his or her money is going when they hear about such waste. Our waste management contract costs around £2m per year more than it should. This equates to the total Council Tax bill for the 1500 houses in the polling district centred on Carshalton Village. Each and every year.

Our spokesman, John Kennedy and his team are always looking at ways that we would use basic commonsense management to reduce this cost substantially. Renegotiating the contract would be a start. Any money saved could be used to cut Council Tax and/or improve our services such as rolling out doorstep glass collection.